By: Ismael Kasooha
Prime minister Rt. Hon. Robinah Nabbanja on Thursday 20th January 2022  met a delegation of  Members of Parliament from Ghana who are in the country to bench mark on how parliamentary business is conducted in Uganda.
While welcoming the delegation, Nabbanja said that  Uganda and Ghana, enjoy strong cordial historical ties that have been growing from strength to strength and can learn from one another.
Nabbanja said  that unlike in Ghana where they have had several presidents in the last 30 years, Uganda has enjoyed and continue to enjoy the leadership  of the National Resistance movement (NRM) under the President Yoweri Museveni that has enabled the country to grow and be stable both economically and politically.
“The president who also doubles as the NRM chairman is attached to the people and Ugandans love him and he knows what needs to be done to transform the country into a middle income status,” says Nabbanja. 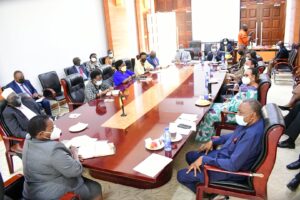 Rt. Hon. PM Robinah Nabbanja presiding over a meeting with the delegation of MPs from the Parliament of Ghana