Ms Anirwoth Pasca, is a member of  the Winjiriber Farmer Group in Palwo Village in Zombo District. The 52-year-old is married to Mr Alex Thomwa. Together, the couple has six children.

Influenced by patriarchal structures and beliefs, which claim that men are the sole decision-makers, she had no hope of having a say in the future plans of her family. Her endeavours to contribute to her family’s development by constructing a permanent residential and commercial house remained unattainable without a greater inclusion in the households’ decision-making and management of economic assets.

However, her perception has since changed. When the Action for Livelihood Enhancement in Northern Uganda (ALENU) project started operations in her village, Ms Pasca’s household was selected and trained in family development planning skills using the vision road journey tool.

According to Mr Cuthbert Aongat, the ALENU project coordinator, the training goes beyond conventional family-centered practices in which child welfare is at the core.

“It targets all household members who benefit from a combination of bundled services customized to meet their specific needs, addresses their vulnerabilities, and strengthens their capacities at the collective and individual level in view of reducing poverty and malnutrition. During the training, the family was taken through different steps, which enabled them to realize the value of joint visioning and household plans. This was a turning point in Pasca’s life since it empowered her to actively shape her family’s future,” he explains. 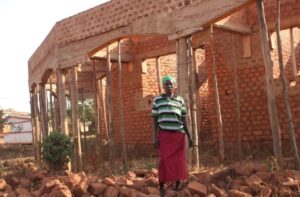 The couple has worked jointly towards attaining one of their main goal of constructing a four-roomed commercial house. They received a share-out from their Village Savings and Loan Association (VSLA) of Shs680,000 plus Shs500,000 from the sale of Irish potatoes and vegetables from which they bought construction materials and paid labour charges. For the future, the duo plans to roof the house, increase their savings and take their children to better schools.

Under the Development Initiative for Northern Uganda (DINU), a Government of Uganda programme supported by the European Union (EU) and supervised by Office of the Prime Minister (OPM), Caritas Switzerland received a grant to implement the Action for Livelihood Enhancement in Northern Uganda (ALENU).

ALENU is implemented by a consortium of four NGOs (Caritas Switzerland, Advance Afrika, Agency for Accelerated Regional Development, and Gulu Women Economic Development and Globalization). It focuses on improving livelihoods through increased and diversified food production, enhanced market opportunities, and better maternal and child nutrition in six districts of West Nile and Acholi sub-regions. Since the onset of the project in 2020, 5,000 households, of who 60 per cent are women, are  have been enrolled.

“The Village Saving, and Loans Association (VSLA) has greatly helped me to expand my business and cultivate for commercial purposes. I have been able to save and start constructing a commercial house,” says Ketty Amule.

The 50-year-old mother of three and five grandchildren from Te-iIwa Village in Amwoma Sub-county in Dokolo District, says: “My whole life has changed now, you can just see how I am looking. I am able to supplement my husband’s effort in making sure that my family lives a good life”.

Building Resilience to Enhance Food and Nutrition Security, Incomes and Health in Northern Uganda (BRENU), a project under DINU, introduced the VSLA methodology to increase saving and credit services in community livelihood groups (CLGs) in the district.

According to BRENU project coordinator Perez Muchunguzi, the CLGs were specifically trained on: Key principles of the VSLA methodology, qualities of good VSLA members, leadership and qualities of a good leader. Other areas include the savings box and its contents, recordkeeping, procedures taken in a savings meeting, and role of a group constitution.

Amule obtained a Shs500,000 loan from her VSLA group, which she used to buy a grinding mill. She has also learnt how to do business and practice commercial farming to support her family.

“I am no longer worried about my husband’s low daily income because I have a grinding mill that brings in great daily income for the family,” she says.

Amule smiles at her future with optimism. She has already paid back the loan and hopes to take a second one. She dreams of owning her own store where she can buy in bulk and sell her produce.