The Prime Minister of Uganda Robinah Nabbanja has said that the crisis in Ukraine should not overshadow the huge humanitarian refugee crisis in other parts of the world including Uganda.

She  made the revelation today while meeting a United Nations High Commission for Refugees (UNHCR) delegation led by the chairman of the Executive Committee of UNHCR Commissioners’ programme, Ambassador Salim Baddoula at her office in Kampala.

Nabbanja said that there is fear that the ongoing Ukraine crisis could overshadow the huge humanitarian refugee crisis needs elsewhere in the world. 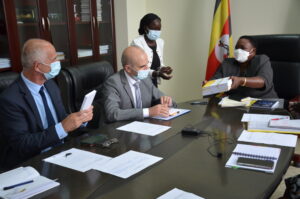 Prime Minister Nabbanja in a meeting with a Delegation from UNHCR, Executive Committee

“We are concerned over what is taking place in Ukraine and we pray that it doesn’t overshadow humanitarian needs elsewhere in the world including Uganda,” said Nabbanja.

The delegation had paid a courtesy call to the Prime Minister to discuss issues of partnerships.

Nabbanja told the visiting delegation that Uganda is hosting over 1.6m refugees and since January this year, over 50,000 refugees have crossed to Uganda from DR Congo and the country needs over 800 million US Dollars to provide water and sanitation, medical, food, shelter and education for the refugees and host communities in the short run.

“At the rate of the ongoing influx, we may have received an additional 100,000 refugees by the end of this year. With this kind of influx, Uganda requires enhanced funding to meet the needs in the refugee response that has been developed by Government and UNHCR,” said Nabbanja.

She added that the country needs over 800m dollars in the short term to provide water and sanitation, medical, food, shelter and education for the refugees and host communities.

The Prime Minister re-echoed the need for planned settlement of refugees so that more land is set aside for production.

Nabbanja said that Uganda appreciates the support of UNHCR in enabling the country to host refugees but briefed the UN body that Uganda has professionals who have handled refugee response issues for so long and are qualified need to be absorbed into the senior leadership of UNHCR body.

The chairman of the Executive Committee of UNHCR commissioners’ programme, Ambassador Salim Baddoula said that he would table the concerns raised in Geneva.

However Salim commended the Uganda Government for its hospitality and open door policy to refugees and said that Uganda is peaceful that is why it can host refugees from other countries.