The delegation led by the Archbishop of the Anglican Church in Uganda the Most Rev. Dr. Steven Kazimba Mugalu held a meeting at the office of the Prime Minister in Kampala.

“We want to join the government in doing community mobilization especially on mindset change to improve the livelihoods of the people in Uganda,” said Kazimba.

The UJCC has held previous meetings with the President, where they presented two project proposals.

Today’s meeting follows a previous meeting the UJCC held with the President, where they presented a proposal on recapitalizing a Microfinance Church project at sh7 billion.

The UJCC is seeking government support to implement other activities which include the Girl Child Project, Access to Justice by Refugees and Support to the Disarmament exercise in Karamoja Sub region.

Disarmament in Karamoja is a government initiative where the Church wants to compliment the efforts, by embarking on mindset change.

“We want as Church leaders to also support the government in the disarmament exercise in Karamoja sub region,” said Kazimba.

The Premier appreciated the partnership gesture to develop the country.

The Prime Minister pledged to coordinate the respective Government Ministries, to support the Church community development initiatives. She said a donor’s conference will be organized to mobilize budgetary support.

“As government we welcome the Church to join us in efforts to disarm the cattle rustlers to pacify the region,” said Nabbanja.

The Archbishop of Uganda Kazimba Mugalu appreciated the cordial relationship existing between the Church and Government.

The Prime Minister requested the Church to consider organizing a National Prayer on the Ebola Pandemic in the country.

The meeting was attended by the Government Chief Whip Hamson Obua and State Minister for Trade Harriet Ntabazi, the Bishop of Kiyinda Mityana diocese Dr. Antony Zziwa among others. 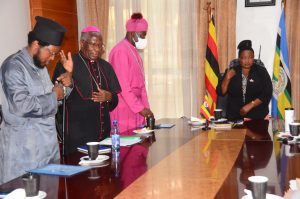 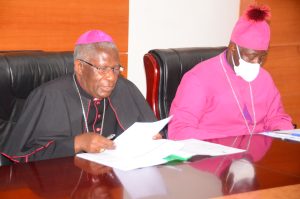