Ugandans working in the Middle East countries have asked the government to set up a rescue center to help in responding to cries of some Ugandans who find themselves in a dilemma.

Ugandans in their Association of Ugandans in the United Arab Emirates (AUU) while meeting the Prime Minister in Dubai said that the government needs to urgently set up the rescue center for emergencies and to save lives of Ugandans abroad.

Zam Nabinje, representing the females in the association, says that they remit a lot of money into the country but they have not been helped to work in a conducive environment whenever challenges occur.

“We need a rescue home so that those who get challenges can live in such a home for some time as they process their papers to either return home or get another job,” said Nabinje. 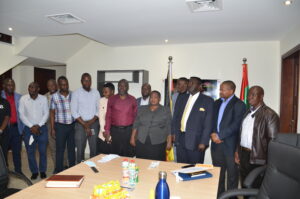 Rt. Hon. poses for a photo with Ugandans in United Arab Emirates after a meeting in Dubai

She said that a director in the Ministry of Ggender, Labour and Social Development promised to establish a rescue home but this has not been effected.

“When we come together as Ugandans we are more secure and know each other and in any case if anything happens to a fellow Ugandan we can manage the situation at least,” said Nsubuga.

Some of the Ugandans living in Dubai said that the government needs to start giving incentives to those who attract investment into the country like what other countries are doing.

“Other governments are rewarding people who connect them to investors but this has not been the case with Uganda  and this needs to be addressed as soon as possible,” Mustafa Ndugwa.

The Prime Minister assured Ugandans in the Diaspora that the government will do all it takes to secure them but challenged Ugandans abroad to stop negative publicity about their mother country.

“What you say about Uganda negatively affects our country so you need to desist from portraying your country in a bad image,” said Nabbanja.

Nabbanja said that  there is a need to shift from casual labourers to professionals who can get more money into our economy because they are highly paid.

“Other countries have shifted from casual labour to professionals and we need to also tap into such opportunities,” said Nabbanja.

There have been numerous social media reports about Ugandans suffering in the Middle East with some losing their body parts.

Nabbanja interviewed one Ugandan in the diaspora about the working conditions there. 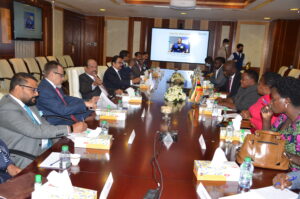 The Ugandan delegation led by the PM meeting Lulu Investers in Abu Dhabi.

In a related development the Prime Minister met investors from Lulu enterprises group of companies who promised to export Uganda’s agricultural products but also establish stores in the country on top of establishment of their farm in the country.

Nabbanja also held a meeting with ENG Company (private investor based in UAE and operating in 14 African countries) who has expressed interest in partnering with the government of Uganda to develop public transport in Greater Metropolitan Kampala by bringing buses to decongest the city. 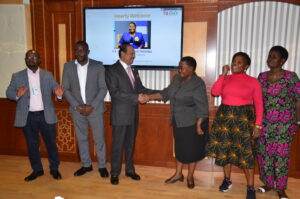 Rt. Hon. poses for a photo with Ugandans in United Arab Emirates after a meeting in Dubai 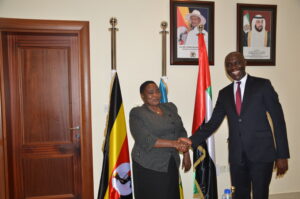 Zaake Kibedi having a handshake the Prime Minister of Uganda at the Embassy in Dubai after meeting the Embassy staff.