The Government of Uganda on Tuesday evening joined the British High Commission in Uganda to celebrate and congratulate Her Majesty Queen Elizabeth II, the Government and people of the United Kingdom, upon the official Birthday and Platinum Jubilee of the Queen.

“On behalf of the Government and the people of Uganda I extend our warmest congratulations to Her Majesty Queen Elizabeth the Second, the Government and people of the United Kingdom, as you celebrate the official Birthday and Platinum Jubilee of the Queen,” said Rt. Hon. Robinah Nabbanja, the Prime Minister of Uganda who represented the President of Uganda Yoweri Kaguta Museveni at the event.

The event took place at the official residence of the British High Commissioner to Uganda in Nakasero. 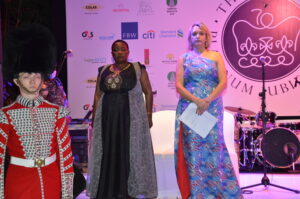 “Seventy Years of service by Her Majesty is testimony to the important role the Queen has played to the UK, the Commonwealth and the world.  Her Majesty Queen Elizabeth the Second has been and remains the glue that keeps the members of the Commonwealth together. Her dignity is admired everywhere she goes,” said Nabbanja.

The Prime Minister said that Uganda and the United Kingdom enjoy excellent bilateral relations and that the UK remains our major development partner.

Nabbanja said that in the quest to transform our country the partnership and collaboration between the two countries is of great significance.

“Your support and partnership in provision of humanitarian assistance, improving maternal health, accountability, reducing impact of climate change and good governance and security are most appreciated,” said Nabbanja.

The premier also welcomed investors from the UK who have put their money here in different sectors of our economy to create jobs and prosperity for Ugandans.

“We applaud the UK together with other funders, for supporting regional economic projects such as Trade Mark East Africa that is aimed at reducing the cost of doing business within the East African region,” said Nabbanja.

The Government of Uganda also thanked the United Kingdom for the support they gave to Uganda during the fight against COVID-19, in terms of equipment and vaccines as well as collaboration in the development of COVID-19 vaccines.

The UK and Uganda have strong bilateral engagement on security issues.

“We commend the UK for working with Uganda to promote regional security and stability in the Great Lakes region, East and Central Africa, and the support to the peace efforts in Somalia and South Sudan,” said Nabbanja. 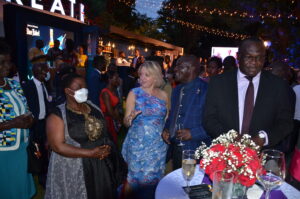 Kate Airey, with other Government of Uganda officials at the party

She lauded the British Government for supporting Uganda to host over 1.5 million refugees that come to our country in search of peace, security and safety.

“Thank you for playing your role in meeting this international obligation to our brothers and sisters who flee, not out of their choice, but because of the situation they find themselves in,” said Nabbanja.

Nabbanja proposed a toast to the good health and prosperity of the Queen, and people of the United Kingdom as we celebrate the official Birthday and Platinum Jubilee of Her Majesty Queen Elizabeth II.

On her part, the British High Commissioner to Uganda, Mrs. Kate Airey commended the Government of Uganda and the people of Uganda for their hospitality and the continued cordial working relationship between the two countries.

Kate said that this Queen’s birthday party is extremely special because on the 6th of February 2022, Queen Elizabeth II became the first British Monarch to celebrate a platinum jubilee marking 70 years of service to the people of the UK and the Commonwealth.

She said that Queen Elizabeth II becomes the most travelled Queen in UK History by visiting over 100 countries and including two visits to Uganda and she has been served by 14 Prime Ministers and the first of Which is Wilson Churchill who described Uganda as the Pearl of Africa.

Kate said that some people say that “there is a crisis of Democracy in our World Today, well I don’t agree, there is no crisis in people’s demand for democracy whether you are in Kiev or Khartoum, the crisis, if it’s anywhere, is on the supply side where the leaders either choose or are able to meet the demands of the people”. “Democracy can be messy, I won’t lie, but it delivers sustainable development gains and without freedom of speech you will never hear the issues affecting the communities,” said Kate.

She applauded the Government of Uganda for the good working relationship even after Independence.

Members of the British Community in Uganda.