President Museveni has called upon the youth to build synergies towards creating a secure and prosperous Africa.

He said the mission of the youth should be geared towards economic prosperity and enhancing strategic security in Africa to propel development.

“As Africans, we need to do away with the dependency syndrome. The African youth should focus on creating wealth by producing and selling goods that have a ready market beyond their national market, and this can only be achieved through market integration in Africa which will also yield strategic security on the continent,” President Museveni said. 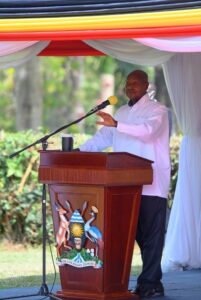 The President made the remarks at the official opening ceremony of the 3rd African Peer Review Mechanism (APRM) Continental Youth Symposium which was held at Speke Resort Hotel Munyonyo on 5th July 2022.

The symposium which was attended by the delegates from the 55 member states of the African Union was organised under the theme “African Union @ 20: Repositioning the youth Agenda for a transformative continent”.

President Museveni noted that the Youth need to focus on enhancing unity in the African continent.

“When Africa is united, there is no problem that we cannot solve as a continent, but because of lack of unity, what is meant to be a small problem becomes big! Therefore, as Africans we need to secure the continent against all threats, especially those emerging as a result of internal weaknesses,” Mr Museveni said.

He also urged the youth in Africa to embrace the ideological position that is centred on the fundamental beliefs of patriotism, Pan Africanism, modernisation and democracy.

At the conference, President Museveni launched the 1 million next-level initiative in Uganda. The initiative aims to create 1 million new opportunities for young Africans in the key areas of education, employment, entrepreneurship, engagement, health and well-being across the continent and in the diaspora.

The Prime Minister, Rt.Hon. Robinah Nabbanja highlighted Uganda’s commitment to improving youth livelihoods citing several initiatives which have been put in place including the Parish Development Model, where 30% of the funds are allocated to the youth. 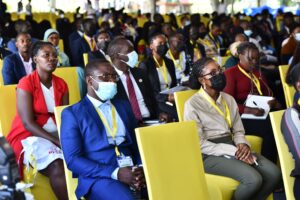 The Minister of State for Youth, Hon. Mateke Sarah Nyirabashitsi noted that the Government of Uganda has set up structures from the grassroots to the national level aimed at supporting the youth.

She, however, noted that the youth lack financial literacy and called for education opportunities that can empower the youth to be thinkers and innovators.

“There is a need for ideology emancipation among the youth to enable them to think and understand their problems,” Hon. Mateke said.

The African Union Special Envoy on Youth, Ms Chido Mpemba who was representing the Chairperson of the African Union Commission, His Excellency Moussa Faki Mahamat pledged to advocate for the inclusion of the young people in every decision that affects their future. She also called for budgetary reforms that continue to address the needs of the youth.

“We need to focus on the marginalized communities and lobby for better opportunities for the youth and young people in those communities,” Ms Chido noted.

The Chief Executive Officer of the African Peer Review Mechanism (APRM), Professor Eddy Maloka highlighted that the youth play a crucial role in strengthening democracy and governance on the continent. He added that as part of the APRM process, youth advocacy has been key in solving challenges affecting young people.

The Prime Minister Rt. Hon. Robinah Nabbanja in a group photo with some of the international youth delegates who attended the 3rd APRM Continental Youth Symposium at Speke Resort Hotel Munyonyo

The Head of the European Union to Uganda, His Excellency, Attilio Pacifici called for inclusiveness of the youth in all the decision-making processes, noting that stereotypes on gender and age should not hinder the participation of women in development.

“There is a need to empower the voice of the youth so that they can play a role in development. The youth should be provided with space to participate in making policies. As the European Union, we realise that the youth voices are getting louder and louder, and we are committed to supporting them in the decision-making process,” Mr Pacifici said.

The meeting was also attended by the Minister of General Duties in the Office of the Prime Minister, Hon. Kasule Lumumba, the Minister of State for Planning, Hon. Amos Lugoloobi and ambassadors among others. End.