Uganda has the necessary economic base to develop, says President Museveni

President Yoweri Museveni has said that Uganda has the necessary economic base for development and socio-economic development despite the hiccups in the world economy.

“We have established the necessary economic base for Uganda’s development and socio-economic transformation, ” said Museveni.

This was contained in a speech read for him by the Prime Minister, Robinah Nabbanja, to mark Heroes’ Day at Kololo Independence Grounds on Thursday.  The President noted that before the National Resistance Movement (NRM) took power in 1986, the country was in the hands of ‘quack political actors’ and was facing 10 strategic bottlenecks that the new government was able to diagnose. 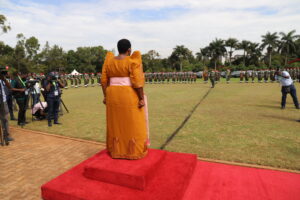 The president said that in his Martyrs’ Day Speech of 3rd June, 2022, he equated the heroism and valor of the 9 NRM supporters, who were brutally hacked to death by Bazilio Okello at Kikandwa, to that of the Uganda Martyrs. These 9 heroes were: Edidian Lutamaguzi, Nkangirwa Matayo, Sentogo Sebastian, Gitta, Kibuuka, Kirumira Edrisa, Sebowa and Kibirige.

Despite the threat of death, they declined to reveal the hideout of the NRA guerrilla unit under the command of Jack Muchunguzi. It was in honor of the memory and legacy of these patriots; and many others, that we declared 9th of June, a Heroes’ Day, said Museveni.

This year’s celebrations were held under the theme, “Commemorating our Heroes and Heroines: An Opportunity to consolidate our Efforts in Securing Uganda.”

The strategic bottlenecks included politics of identity which weakened the state, underdeveloped human resource, leading to poor infrastructure, lack of industrialisation and export of raw materials. Others were a small market, underdeveloped service and agriculture sector, corruption and suppression of democracy.

“Since 1986, the NRM has made significant progress in tackling the above problems. We have stamped out the negative politics of identity; built a patriotic and Pan- African army to defend our country; improved the human resources through mass immunization, UPE and USE programmes; improved the infrastructure; modernized agriculture; promoted the private sector to be the engine of economic growth and consolidated democratic governance and public accountability,” the president said.

However, development alone is not enough, though it must come first.

Development is a collective good, but wealth and jobs belong to individuals, families, groups, or companies,” Museveni said.

The President challenged Ugandans not to be spectators in the drive towards increasing the household incomes, but to work towards ensuring that the 39% of the households that are still trapped in subsistence farming become wealth producers and job creators through commercial and modernised agriculture.

Museveni called for the need to prioritise the creation of jobs and wealth for the households through focusing on four sectors including commercial agriculture, industries (big or small), services (hotels, transport, professional services and shops) and ICT.

“The leadership of the NRM remains committed to principle number two of our four principle vision, which is Pan-Africanism. We cannot be satisfied with Uganda’s small market of only 42 million people.

This cannot guarantee our prosperity. Therefore, we support the integration of the East African and African market of 1.2 billion people,” the message read in part.

Museveni noted that a bigger market is good news to Ugandans since it offers an opportunity for the country to sell its surplus commodities, such as sugar, maize, milk, cement and steel bars.

He stated that whereas Heroes’ Day recognizes the sacrifices of the country’s heroes and heroines, it also challenges every Ugandan to shoulder the patriotic duty of securing the gains of the NRM struggle.

This year’s celebration marked the 33rd year Uganda has been observing the day since 1989. Heroes’ Day came through a proposal presented to President Museveni in 1989 by the people of Kikandwa village in Luwero district.

On June 1, 1989, Cabinet discussed the proposal and passed it, making the Heroes’ Day an annual celebration.

Jim Muhwezi, the Security Minister, explained that the choice of the date was against the background that around that time, the Uganda National Liberation Army forces of the then government in power had captured and brutally killed Edidian Luttamaguzi for refusing to disclose the whereabouts of a small contingent of NRA fighters in Kikandwa village, Semuto sub county in the then Nakaseke District.

“Heroes’ Day is an opportunity for each of us to individually reflect on what we can do to enhance the national goal. The examples of our heroes helped to inspire and show that anything is possible once we dedicate ourselves to an excellent service of our motherland Uganda,” he said.

“Despite the threat of death, they declined to reveal the hideout of the NRA guerrilla unit under the command of Jack Muchunguzi,” he said.

Alice Kaboyo, the Minister of State in Charge of Luwero-Rwenzori area noted that the Office of the Prime Minister has been and continues to support the veterans in the Luwero Triangle through paying gratuity and ensuring that they benefit from the various government programmes.

She said in the next financial year, the Government plans to pay a one off gratuity to 10,000 civilian veterans and support 200 civilian veteran families through income-generating projects to increase household incomes.

During the celebrations, 82 Ugandans were awarded medals.

Out of these, 34 received the 50th anniversary Golden Jubilee Medal in recognition of their outstanding service and loyalty to the country.

Among these is Grace Tumubwoine, who has served as a tea girl in the State House for the last 43 years.

Seventeen Ugandans received the Nalubale medals for their contribution to the political development of Uganda.

Eighteen medals went to Ugandans who joined the armed struggle against dictatorship, five Damu medals were given to army officers who were wounded or killed during the liberation war.