During the Policy Coordination Committee (PCC) meeting chaired by the Prime Minister of Uganda, Rt. Hon. Ruhakana Rugunda, the second Uganda Nutrition Action Plan (UNAP II) was endorsed. The plan that will cover 2020 to 2025 was passed during the meeting held on 22nd September 2020 at the Office of the Prime Minister. 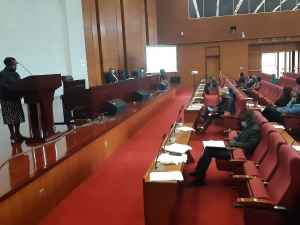 Under the theme, Leaving no one behind in scaling up nutrition actions in Uganda, the
UNAP II forms the common results framework on nutrition for Uganda for the next five years. The plan was developed with contributions from all relevant stakeholders including government ministries, departments and agencies, local governments, parliament, the private sector, and academia.

“The Second Nutrition Action Plan has been developed to build upon the gains made under UNAP I. This plan will be our vehicle in ensuring that the country achieves all the SDG 2 targets relating to ending hunger, achieving food security, improving nutrition, and promoting sustainable agriculture,” Rt. Hon. Rugunda said.

This development comes at a time when Uganda, and the rest of the world, are faced with coronavirus disease(COVID-19). According to the Nutrition Guidance for the General Population in the Context of COVID-19, developed by the Ministry of Health in Uganda, attention must be paid to good nutrition before, during, and after infection and this includes intake of immunity-boosting foods in the diet.

The advent of COVID-19 adds to the public health challenge in the country. According to the 2016 Uganda Demographic Health Surveys (UDHS), 39% of children under five years are seriously stunted.  The document also reveals that West Nile and Karamoja regions have the highest percentage of acutely malnourished children. The UNAP is designed to guide in the reduction and ultimately, elimination of malnutrition in the country.

The Prime Minister explained that, in the presidential communication on measures against COVID-19, His Excellency Yoweri Kaguta Museveni emphasized the need for good nutrition in addition to the standard operating procedures (SOPs) as a means of keeping safe from the pandemic as a vaccine is awaited.

“The adoption of UNAP II is in line with the president’s views and government priorities. I call upon you to embrace this plan by providing support towards its adoption, implementation, and being champions for nutrition in all your spheres,” Rt. Hon. Rugunda said.

According to Mrs. Maureen Bakunzi, Assistant Commissioner for Strategic Coordination and Implementation in the OPM, malnutrition is mainly driven by disease burden, poor dietary diversity, and physical inactivity.

“The cost of hunger 2013 report reveals that the government loses revenue worth 1.8 trillion to malnutrition. Causes of malnutrition are multiple and inter-related, calling for a multi-sectoral, coherent and well-coordinated approach,” Mrs. Bakunzi explained.

She added that the UNAP institutional framework is composed of a number of line ministries, departments, and agencies (MDAs) in partnership with non-state actors. OPM’s role is the coordination of this agenda. In line with the National Development Plan, the UNAP II envisages a well-nourished, healthy, and productive population, effectively participating in the socio-economic transformation of Uganda. The goal is to improve the nutrition status of children under 5 years, school-age children, adolescents, pregnant, lactating mothers, and other vulnerable groups by 2025.

As part of the monitoring and evaluation (M&E) framework, a nutrition dashboard has been developed to enhance management, M&E, and reporting on the UNAP II implementation. In his presentation to the PCC, Mr. James Muwonge, Director for Socio-Economic Surveys at the Uganda Bureau of Statistics (UBOS) said that the dashboard had been designed to ease its navigation by categorizing the information by sectors.

The nutrition dashboard is one of the outputs of the National Information Platforms for Nutrition (NIPN), a government of Uganda initiative supported by the European Union. NIPN is implemented by the OPM in partnership with UBOs and with technical support from UNICEF.

The PCC members thanked the OPM for developing the UNAP II and noted that nutrition is vital in the development of the country.