The Prime Minister of Uganda Rt. Hon. Robinah Nabbanja has appealed to Indian women living in Uganda to also pass on entrepreneurship skills to their fellow Ugandan women.

Nabbanja, while presiding at the Women Entrepreneur Conference and Cultural Gala organized by the Indian High Commission to Uganda at UMA Show Grounds on Saturday said that it would be good for the Indian women to also train Ugandan women in business.

At the occasion, a number of female entrepreneurs were awarded for excelling in different fields of entrepreneurship.

The Prime Minister appreciated the solid and mutually beneficial relationship between Uganda and India. 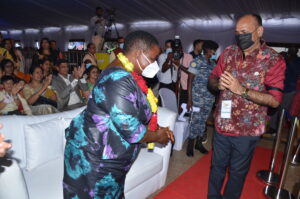 “Our two countries and people share a long history of culture, business, trade and education. The Indian community in Uganda and Ugandans of Indian origin have contributed tremendously to the recovery and consolidation of our economy, Industry and other spheres for many decades,” said Nabbanja.

She said that there are many Ugandans in India undertaking studies in different disciplines and also doing business which is evidence of  the close ties Uganda and India enjoy.

Nabbanja said that she was pleased to learn of this exercise that they have been undertaking of training women in business and entrepreneurship skills.

“It is a well-known fact that India has a well-organized track record in entrepreneurship and trading. When you go to a shop owned by an Indian, you are sure to buy whatever is being sold because of good customer care skills,” Nabbanja added.

She acknowledged that India was able to lift many of its people out of poverty through cottage industries and small scale enterprises asserting that learning from the Indian experience is learning from the best.

The premier noted that women in Uganda are largely involved in small scale businesses which face a lot of challenges with some lacking the capital to inject in their businesses to expand them while others cannot borrow from banks because the interest rates are high, and in most cases, women do not have the collateral to provide as security to guarantee loans.

The Premier said that book keeping is a serious challenge to many businesses in Uganda and managing records to ensure that they track profits and losses.

“As Government, we are aware that when women thrive in business or any enterprise, the returns benefit many more people and positively impact entire households and communities,” she said.

She said that it is for this reason that President Yoweri Museveni and the NRM have for long emphasized support to women enterprises through specialized skills training for young girls and programmes such as the Women Empowerment Fund.

President Yoweri Museveni last month launched the Parish Development Model, a new flagship program aimed at transforming the 39 percent of our people who are still outside the money economy.

“We would like them to identify enterprises that bring money and engage in them to improve their lives,” explained Nabbanja.

She mentioned that 30 percent of the funds that will be channeled to Parishes have been earmarked and set aside for women and this is an additional level of affirmative action to support women.

“It would be good if programs like this one the Indian High Commission has organized could be rolled out further to communities at the grassroots,” the premier said. 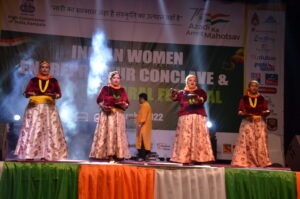 The Minister for Health Dr. Jane Ruth Aceng applauded India for providing basic but affordable health care both in Uganda and India.

The Indian community in Uganda thanked the NRM government for the hospitality exhibited to Indians whenever they come to Uganda.