Prime Minister Rt. Hon. Robinah Nabbanja has revealed that she will now turn her guns to the enforcement of free education in government Aided schools as soon as the Parish development model is rolled out.

“Our children are dropping out of school because some parents cannot afford to pay school fees being levied by the head teachers and others in management committees and this must stop forthwith,” said Nabbanja.

During the state of the nation address by President Yoweri Museveni recently he expressed concern that some head teachers have continued to charge pupils fees in government schools which is against the government policy of free universal primary and secondary education. 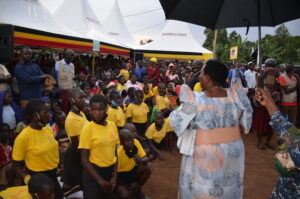 The Prime Minister Rt. Hon. Nabbanja Robinah while addressing the people of Busonga on Saturday

While addressing Christians at Kyatiri Catholic Church in Masindi district on Sunday Nabbanja said that head teachers who cannot heed to the directive of the president must resign or start their own schools where they can charge school fees.

“Those head teachers who cannot heed to the government directive should resign and go to start up their own private schools where they can charge whatever money they want,” said Nabbanja.

Nabbanja appealed to teachers to return to classes because the government has a comprehensive plan to enhance salaries of all workers but it cannot be done at once.

“Government will enhance the salaries of all civil servants but in a phased manner and that is the reason we began with scientists and the science teachers. Currently we don’t have money to enhance emoluments of all workers at a go because of theCovid-19 pandemic,” said Nabbanja.

She said that the government continued to pay teachers their salaries for close to 2 years during Covid period despite the fact that they were not teaching.

“Government paid the salaries of all teachers even when they were not teaching but now they are striking because we have increased the salaries of scientists. Our people are capitalistic in nature who only mind about themselves, not others,” said Nabbanja.

In a related development the prime minister asked the people of Bunyoro and Busoga to start engaging in enterprises that can accumulate money even when land is becoming scarce.

“Given the scarcity of land prevailing in the country farmers need to select enterprises that can bring in money through intensive farming. Stop growing sugar cane, tobacco or maize if you have 4 acres or less because you will have condemned yourself to die poor,” said Nabbanja. 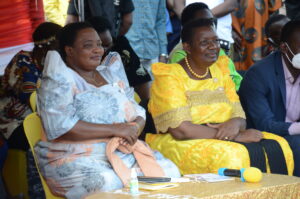 She told them to grow high value crops such as onions, Irish potatoes and vegetables that have the potential to give them more money compared to maize and sugar cane.

“An acre of maize can yield 10 bags or slightly above and each bag goes for sh150,000 but the same acre of onions one can harvest 30 bags and each costs sh250,000. So as farmers you need to be calculative in what enterprise you engage in,” said Nabbanja.

Barnabas Tinkasimire, the Buyaga West legislator, asked the government to also invest more in Agriculture in Bunyoro as it has done to the Rwenzori sub region to uplift the lives of the farmers in the region.

Cosmas Byaruhanga the Masindi LC V chairman commended the government for allocating funds for the rehabilitation of Masindi Hospital which has been limping for some time and also other sectors.

The prime minister donated 20 million shillings towards the roofing of the Church at Kyatiri.

The function was graced by members of Parliament from Bunyoro and outside and supported generously.