Prime Minister rushes to Elgon region to assess the extent of damage of floods, blames it on environmental degradation

The Prime Minister Rt. Hon. Robinah Nabbanja has condoled with the people of Elgon sub region who lost their dear ones as a result of floods that swept the low-lying areas of Mbale and Kapchorwa on Sunday.

This is after the rain that started on Saturday at 8pm until about 7am on Sunday that left several villages devastated.

The affected villages include Namabasa, Busajabwankuba, Busamaga, Nkoma and Mbale industrial park devastated where property worth billions of shillings was destroyed.

Nabbanja, who on Sunday visited the affected areas, said she was sent by President Yoweri Museveni to assess the situation for immediate intervention.

“The President is aware of this disaster and is concerned about what happened. We are here to assess the situation and give support, where necessary, to evacuate the survivors who are believed to be trapped. We are in touch with the UPDF and police to send marine officers to search for the victims and bodies,” said Nabbanja.

Nabbanja said that the disaster in Elgon region could have been avoided if the people heeded to the advice of the president not to degrade the environment.

The premier said that the residents who are destroying the environment are causing such disasters and will continue to cause problems for the country. “This disaster is a result of environmental degradation and it’s a pity that some politicians are in support of the residents to remain in such areas. I told you a fortnight ago that you are sitting on a time bomb and see what is happening,” said Nabbanja.

Nabbanja was taken to several scenes to assess the magnitude of the flash floods that killed over 10 people and destroyed property worth billions of shillings.

She went to Nabuyonga Bridge where hundreds of residents had gathered searching for the missing people.

She also took some time to speak to the residents and relatives of the deceased and those that were still searching for the reported missing bodies still stuck underneath River Nabuyonga.

She later visited the Mbale City mortuary where the bodies were being taken for postmortem which was being conducted Eastern Region Police Surgeon, Dr. Barnabas Rubanza.

The Premier also visited SINO Uganda Industrial Park in the Industrial City Division where she found that property worth billions of shillings was submerged in water.

Nabbanja promised to ensure that the investors are protected from such calamities by having early warning systems in place.

Nabbanja with a team of technocrats also visited Bunghoko bridge along Mbale -Tororo Road that had been submerged and partly destroyed by the flood waters. 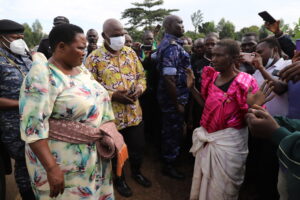 AIda Nabugwere, 72, one of the survivors talking to the premier at Bunghoko Bridge in Mbale

The Prime Minister directed that relief food and other essential items be dispatched to Mbale to address the situation as the government comes up with a more comprehensive plan for the Elgon region.

After assessing the affected areas and families, she addressed leaders at the Mbale Council Hall and assured them that the government was determined to extend assistance to the affected families after finding out the actual number of people who were affected.

Nabbanja also used the same time to call for UPDF and Police marine divers to come and help the locals in search of suspected missing bodies still stuck underneath River Nabuyonga.

“I have talked to the CDF of the UPDF and Police that they should send marines to help the locals in search of the bodies” Nabbanja said.

She promised to send more teams on ground to come up with issues that need to be addressed to avoid a repeat of such in future.

Nabbanja donated one million shillings to each family that lost their dear ones and also aided the survivors with money to start up a new life.

Among the beneficiaries was Aida Nabugwere, 72, who survived with her 7 grand children who was given one million shillings to rent a house in the short term and promised to give her iron sheets to build another house.

Latest reports indicate that the death toll as a result of the floods has risen to 20 after 10 other bodies were retrieved on Monday morning.