Uganda exports goods worth about 10 million dollars per year, while importing 100-million-dollar worth of goods to Egypt.

While meeting with the Egyptian Ambassador Ashraf Swelam, Nabbanja says the main interest between Uganda and Egypt is prosperity and wealth creation. She informed the Ambassador that Uganda’s export volumes to Egypt are still very small compared to what is imported. 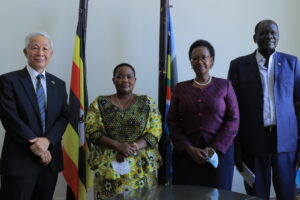 Nabbanja said “Ugandan products such as fruits, vegetables, coffee, tea and meat, are among the best that the Egyptian people can enjoy. She asked the Ambassador, through bilateral cooperation, to find ways of addressing issues that cause the trade imbalance.”

The Egyptian Ambassador to Uganda Ashraf Swelam took note of the concerns raised by the Premier.

“Egyptian Agency for Partnership for Development, funded construction of a Solar Power Plant in Busia district, worth 6 million dollars. The project was implemented by the Arab Organization for Industrialization, in collaboration with Giza Systems, to generate 4MW Solar Powered Electricity. It serves different regions in Eastern Uganda,” said Ashraf.

The Prime Minister also met with the Japanese Ambassador to Uganda Fukuzawa Hidemoto.

She cited the economic imbalance between the two countries. Nabbanja says Uganda would appreciate more to see her products in super markets in Tokyo and other Japanese cities.

She informed the Japanese Ambassador that Uganda would be pleased to have Uganda Airlines accredited to fly to Japan, to facilitate business transactions.

“As you may have heard, the President last week launched the Parish Development Model, a new approach to transforming 39 percent of our people who are not in the money economy. Among other things will be promoting production of various products. We will need to process these and add value. We count on friends like Japan in this journey,” says Nabbanja. 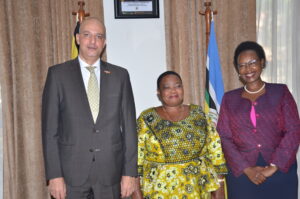 The Japanese Ambassador pledged total commitment to strengthen economic cooperation with Uganda. He spoke highly about President Yoweri Museveni and particularly on his contribution towards pacifying the great lakes region.

The Prime Minister requested the Ambassador to support the idea of organizing Uganda’s refugee camps. She said there was a need to put up storied buildings to accommodate refugees and thereby liberate land to be used for agricultural production.

The meetings were attended by the Minister for Relief Disaster preparedness and Refugees, Hon. Hilary Onek and State Minister for Luwero Hon. Alice Kaboyo.