The Prime Minister of Uganda Rt. Hon. Robinah Nabbanja has asked the young generation leaving universities to be careful while selecting peers and partners to become responsible citizens so as to contribute to the prosperity of the country.

“Be proud of yourselves. Hard work pays. However, I must remind you that the new chapter you are embarking on is more demanding and will require a practical approach to succeed,” said Nabbanja.

Nabbanja made the remarks while presiding over the 6th Graduation ceremony for the University of Kisubi at their Campus in Kisubi.

“Do not let the paper degree you are walking home with today, stop you from rolling up your sleeves and getting your hands dirty to work, make money and earn a living,” advised Nabbanja. 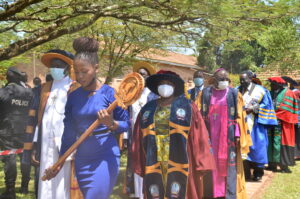 The PM joined by the Archibishop of Kampala Archdiocese His Grace Rt. Rev. Paul Ssemwogerere during the graduation ceremony at the University of Kisubi

Nabbanja said that some young persons ruin their life after graduation by involving in reckless behavior such as alcoholism.

“I want to appeal to you to desist from alcoholism because this will ruin your future and all the investment your parents and guardians have put in you will be put to waste,” said Nabbanja.

Nabbanja thanked the University for training Ugandans and providing them with the necessary preparation, skills and knowledge to enable them make a contribution to the transformation of the country.

“I am particularly pleased that the foundation of the University of Kisubi is rooted in the works of the Brothers of Christian Instruction. As someone who personally benefited from your type of training during my secondary

School days, I know for sure that these young men and women have been trained well,” said the Prime Minister. 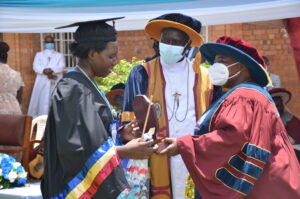 Nabbanja lauded the University of Kisubi for promoting sciences which is the main agenda of His Excellency the President so as to transform the economy.

The Premier said that as His Excellency the President of Uganda, Yoweri Kaguta Museveni has always emphasized, the country needs to put more weight on science because it is the foundation upon which all technical and medical fields are anchored.

“Science is the basis for technology and innovation, and it is innovation and technology that will drive our transformation agenda to realise the vision 2040 and propel our country to middle income status,” said Nabbanja.

Nabbanja was happy to hear that the President appreciated the efforts of training good Science teachers and gave the University 50 Science scholarships per year for five consecutive admissions to sponsor 250 good but economically disadvantaged students in Mathematics, Physics, Biology, Chemistry and Computer Science. The Prime Minister (in front) during the graduation ceremony

She assured the University she will remind the President about the outstanding arrears Government owes to the university and promised to contact the relevant agencies to have it resolved.

The Chancellor of the University of Kisubi Brother Casio Aizire asked the graduands to be disciplined if they want to succeed in life.

The graduation ceremony began with a holy mass celebrated by the Archbishop of Kampala Archdiocese, His Grace Rt. Rev. Paul Ssemwogerere who prayed for peace and blessed the graduands. 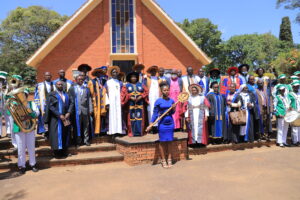 Some of the graduands were awarded first class degrees and given prizes by the university while others could not hide their excitement upon attaining such a milestone.

Some of the parents of the graduands say that it was the grace of the Lord that enabled them to support their children to complete studies.

The University of Kisubi is promoting sciences by training teachers among the other disciplines offered.