The Prime Minister of Uganda Rt. Hon. Nabbanja Robinah has assured the people of Buhweju District that the government working with investors will establish a tea processing factory in the area to add value to their crop.

“I have heard your concerns about tea and as a government we have already gotten an investor who will establish a tea factory here to add value to your crop so that household incomes can increase,” said Nabbanja.

Nabbanja made the remarks on Friday as she presided over the belated International Women’s Day celebrations for Buhweju district at the district headquarters. 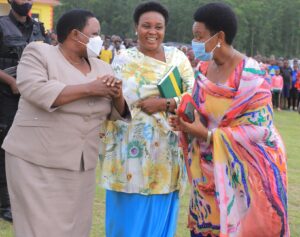 The function was organised by Oliva Katesigye Kwoyekyenga, the Woman Member of Parliament, Buhweju District in collaboration with Francis Mwijukye, the Buhweju legislator and Ephraim Biraaro, the Buhweju West County legislator.

The Prime Minister said that owing to the challenges faced by tea farmers, the government began hunting for investors and already Elite Agro Company is in the final stages of signing an MoU with the government to set up 7 tea factories countrywide and one will be located in Buhweju.

Oliva Katesigye Kwoyekyenga told the Prime Minister that farmers have a lot of tea but it cannot be processed.  She said that some farmers produced tea clones but they have now spent over three years and are going to waste.

“Our farmers made nursery beds for tea and millions of seedlings were produced but all of them have remained in the beds for the last three years,” said Katesigye.

In response the Prime Minister assured the people that she would consult the line ministry so that the farmers can be paid and the seedlings planted to feed the upcoming factory in the area.

Buhweju is a hard-to-reach area full of hills and valleys and is occasioned by landslides that block roads at any time especially during the rainy season.

Nabbanja told the congregation that the government had already awarded a contract to China No. 8 Company to upgrade the Bwizibwera-Buhweju Road to tarmac.

She castigated men who have a vice of beating their wives saying that such behaviour is archaic and must stop.

“In this era, no man should be beating his wife for any reason because of divergent views. Domestic violence is counterproductive and must be condemned by all people,” said Nabbanja.

The Premier condemned acts of gender based violence saying that they affect women and children mostly.

The function was characterized by exhibitions, Woman-led parade, traditional dances by women and was graced by over 40 Members of Parliament ,Resident District Commissioners, LC V Chairpersons and hundreds of residents.

The Prime Minister handed over certificates to individuals and organisations who have contributed greatly to the development of Buhweju District.