President Yoweri Museveni has warned civil servants against sectarianism in the provision of services in the country.

While closing the training of civil servants from the Ministry of Public Service, President Yoweri Museveni, who was represented by the Prime Minister Robinah Nabbanja, said that promoters of sectarianism are enemies of the prosperity of their people.

Museveni said that since the launch of the Patriotism program in Secondary Schools and later Higher Institutions of learning, a great number of young citizens have obtained useful knowledge on their role in safeguarding the future and prosperity of Uganda.

“Patriotism is one of the core principles of the National Resistance Movement. Patriotism is important because it inspires people to place the national interests of their country above the narrow sectarian interests of tribe, religion, regions,” the message read in part. 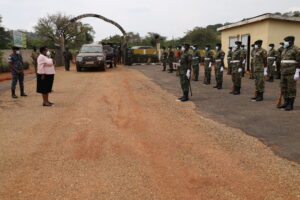 The president said that the destructive nature of sectarian thinking is clearly demonstrated in Uganda’s history.

The European conquest of Africa was, to a great extent, successful because the African populations were fragmented into many rival tribes that hardly cooperated.

He said that the earliest European explorers, who first travelled to the interior of Africa like John Hannington Speke, were able to observe that though the African people were linguistically similar, they were divided into tribal Kingdoms and Chiefdoms.

“These Kingdoms maintained fierce hostilities among themselves which made them easy prey for the sophisticated and armed Europeans.

When the foreigners invaded Africa, they imported another form of polarization that further divided the people on the basis of tribe,” said the president.

Museveni said that the rivalry was Catholic against Protestant and vice-versa, Christian against Moslem and vice-versa and Religious rivalry resulted into death and destruction of property as each religion struggled for dominance and influence over the African population.

He said that unfortunately, the leaders who replaced the colonialists after independence further widened the cracks of division, to gain short-lived political scores. They started forming political alliances along religious lines.

The president said that it was suicidal and the results were disastrous to the process of nation building. Democratic Party (DP), Uganda People’s Congress (UPC) and Kabaka Yekka (KY), were formed on the basis of religious and tribal sectarianism; DP for Catholics, UPC for Protestants and KY for Baganda Protestants.

“This is the ideological disorientation that the NRM resisted and fought by emphasizing patriotism for Uganda and Pan Africanism for Africa. Identity cannot guarantee one’s security and prosperity. It is self-defeating to cling on to identity because so often the people who are outside one’s tribe or religion are the ones who support his or her prosperity,” said Museveni.

“I urge you all who have passed through the patriotism training to be good ambassadors of unity and socio-economic transformation. You must be the light in your Ministry and in your communities and serve as good examples,” said the president.

Government has begun training all public servants in Ministries, Departments, Agencies and Local Governments to match the new changes that have taken place in provision of service delivery. 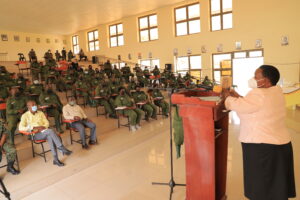 “Dynamics demand that we prepare them for the new approach but also to instill a sense of patriotism because it is a key pillar of the NRM government and once this pillar is strengthened them to better serve our people,” said Muruli Mukasa,” the Minister for Public Service and Constitutional Affairs.

Mukasa said that there are inherent short comings in service delivery which require being addressed and such training is fundamental.

He said that they will start with all Ministries, Government Agencies and ensure that all workers starting from the Minister to the Office Attendant are trained.

Muruli said that after the Ministries and other Government Agencies are covered the patriotism training shall be rolled out to Local Governments to streamline service delivery.

The Minister was Friday addressing over 45 civil servants from the Ministry of Public Service who have undergone a two week training at the National Leadership Institute (NALI) Kyankwanzi.

The Director NALI Brigadier Charles Kisembo said that the two week training emphasized on ideology and how to sustain the gains of the people’s revolution.