President Museveni lauds the people of Lira for rebuilding their area

The commander in-chief of the Uganda People’s Defence Forces (UPDF) Gen. Yoweri Kaguta Museveni has lauded the people of Lira for working hard to rebuild their area after devastation and disruption by the Lord’s Resistance Army (LRA) war.

“I would like to thank the people of Lira for working hard to rebuild your area after devastation and disruption by the war. I thank all those individuals and organizations who worked with government for return of peace and tranquility in this area,” said President Museveni.

The president was represented by the Prime Minister of Uganda Robinah Nabbanja at the 18th commemoration of the Barlonyo massacre at Barlonyo B Village, Agweng Sub County, Lira district.

In his message the president asked the people of Lira and Lango region in general to use the peaceful time to work hard to embark on development.

“Government will continue to work for maintenance of peace in the whole of Uganda and also put the necessary infrastructure in place as a way of facilitating the country’s development,” the message read in part.

The president asked the people to continue working together in unity for the good of Lira and Uganda.

He thanked the people of Lango for the support they have continuously given to the National Resistance Movement.

“The vision of the NRM Government is to transform the society through industrialization.  Government is committed to continuing with developmental efforts, with particular emphasis on increasing household incomes,” said Museveni.

Museveni said that the Kony insurgency started in 1986, August, 22nd, when battalion no. 28, under Jet Mwebaze at Bibia, was attacked. 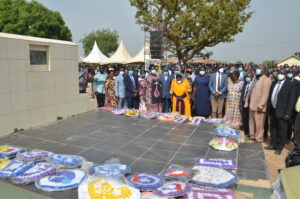 On February 21 2004, LRA rebels attacked Barlonyo village and killed over 300 people and were later buried by government at Barlonyo.

The people of Lango sub region asked the government to expedite the gazetting of the Barlonyo massacre memorial site into a tourist site and also develop it to international standards.

“This is a historical site in the Lango sub region and the country in general because many lives were lost in this very place. We need to develop it into a tourist site and also list the names of the people who perished from here,” said Stephen Ajul, the Lango Cultural Foundation Prime Minister.

Meanwhile the president said that government has introduced the new Parish Development Model. The new model is a strategy for accelerating wealth, job creation and improving service delivery at parish level.

He said that the Parish Chief is going to be the coordinator of all government efforts at each of the 10,594 parishes and report to the sub-county chief (as provided for in Sec 69 in Local Government Act of 1997).

“Each parish is going to have a co-operative society through which government support will be channeled. I urge leaders at all levels to support the implementation of this intervention,” the statement read.

He said that its intent is to take government to the people in a more effective way through: data gathering, community mobilization mindset change, area-based enterprise selection and development, provision of financial services, co-ordination of government programmes, and feedback by the people on government services and wealth programmes (local accountability). 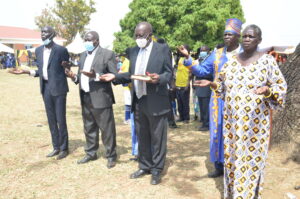 Another objective is also to increase the effectiveness of interaction between Government and citizens to accelerate the realization of socio-economic transformation – getting Ugandans out of subsistence economy into the monetary economy within 5 years.

The Parish Chief is going to be the coordinator of all government efforts at each of the 10,594 parishes and report to the sub-county chief. Each parish is going to have a co-operative society through which government support will be channeled. I urge leaders at all levels to support the implementation of this intervention.

The tranquil setting belies its horrible distinction as the location of one of the largest single massacres committed by the Lord’s Resistance Army during its 23-year insurgency. 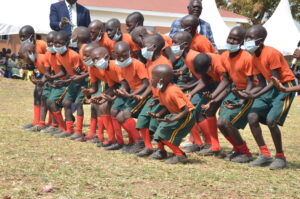 In the space of less than three hours on the late afternoon of 21 February 2004, over 300 people were brutally murdered by LRA rebels and an unknown number were abducted.

The Prime Minister also delivered a brand New Motorcycle to the Barlonyo B village chairperson to help him in mobilising the people for development.

Nabbanja said that the motorcycle was gift from the president who also supported the Barlonyo massacre affected people with sh30m to help them engage in productive work. 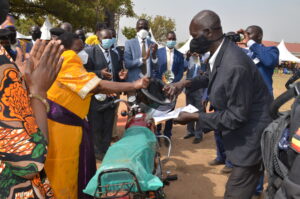