President Yoweri Museveni has lauded the faith of unity believers for promoting unity in diversity which is one of the core principles of the National Resistance Movement-(NRM).

In the president’s message delivered for him by the Prime Minister of Uganda Robinah Nabbanja Museveni said that uniting people promotes prosperity and national development.

“I want to thank Faith of Unity leaders for promoting unity of all people despite their differences in tribes and religion. Thank you for the work you are doing especially for keeping the faithful in unity,” said Museveni.

Nabbanja represented the president during celebrations to mark 93rd birth day of the founder of the Faith Unity, Owobusobozi Bisaka at Kapyemi, in Muhorro town council, Kagadi district, the headquarters of the Faith of Unity in the World.

The president thanked the believers of faith of Unity for supporting the NRM government and himself in the 2021 presidential and parliamentary elections. 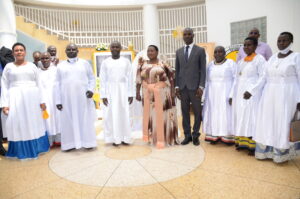 Owobusobozi Bisaka, next to the Prime Minister, pose for a group photo at Kapyemi in Muhorro Town Council, Kagadi district

The president asked the Faith of Unity followers to support government programmes, especially the Parish development model (PDM) that is being rolled out in the country.

He said that the parish development model is the answer to lifting the remaining 39% of the subsistence farmers into the money economy. 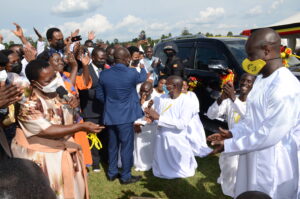 “The money is intended to benefit households not groups as it has been with other programmes because the poverty is at the homes,” said the president,

The president appealed to the hundreds of the people who had gathered to desist from the vice of land fragmentation by dividing family land but rather utilize the land as families.

“Land fragmentation is causing many people to fail to engage in some enterprises because they require much land yet it is subdivided to individuals who end up selling land,” said Museveni.

The president advised Ugandans to engage in high value crops because of the increasing scarcity of land so that they can benefit from small pieces of land.

Some of the ventures listed for farmers are Coffee, Poultry, Fish ponds

The president donated a brand new Land Cruiser vehicle and sh20m to Owobusobozi to congratulate the faith of Unity believers upon the 93rd birthday anniversary.

On his part Omukwenda Akugizibwe Bisaka, the heir to Owobusobozi Bisaka asked the president to allow the teaching of the faith of unity religion in schools and be examinable.

“The Christians and Muslims have Religious education in schools but our children are forced to study things they don’t understand. We request that the government allows the Faith of Unity book to be integrated into the syllabus,” said Bisaka.

He asked President Museveni to consider the faith of Unity Resident District commissioners who were dropped in the recent reshuffle because they don’t have even a single RDCs in the whole country belonging to the Faith of Unity.

They requested a physical interaction with the president to discuss a number of issues regarding their faith.

Owobusobozi donated a special chair to president Museveni as a sign of appreciation for the freedom of worship ushered in the country and the support he renders to the faith of Unity.

Currently the Faith of Unity has over 4,000 healing centers (Matambiro) spread all over the country and beyond.

The function was graced by the state minister for Transport Fred Byamukama, members of Parliament, LC V chairpersons from Bunyoro and beyond, Resident District Commissioners among others.