The Prime Minister Robinah Nabbanja, today held a meeting with Karamoja sub region Members of Parliament, to follow up on the looming hunger crisis in Karamoja.

The meeting took place at the Office of the Prime Minister in Kampala.

A consignment of 200 metric tonnes of relief food has been dispatched from the Prime Minister’s Office, to Karamoja sub region.

This is in response to the persistent hunger crisis affecting the people in Karamoja.

The Prime Minister, in a follow up meeting with Karamoja sub region Members of Parliament in Kampala, said food will be distributed at sub counties to ensure transparency.

“We have resolved to have food distributed at sub county level to reduce delays and other challenges of food disappearing,” said Nabbanja.

The question of the hunger crisis in Karamoja, was discussed in Cabinet and the Finance Ministry was tasked to urgently provide 135 billion shillings, to procure food items.

Nabbanja on Tuesday informed Parliament that the sh135 billion will be used to procure food relief for three months, including seeds for planting.

The meeting concurred that the persistent problem of hunger in Karamoja sub region needed short, medium and long term solutions.

The Prime Minister noted that the Karamoja region, depending on charity, was not sustainable.

“What we are doing is to respond to the challenge of hunger but we shall come up with strategies aimed at addressing the problems of Karamoja once and for all,” said the premier.

The recent upsurge in insecurity in Karamoja has worsened the hunger situation.

Families are hesitant to go out in their gardens to cultivate crops.

Karamoja region Members of Parliament alleged corruption tendencies in the recent distribution of goats in Karamoja – a project launched by the President.

He assured Karamoja MPs that the Office of the Prime Minister will always ensure transparency. He invited the MPs to participate in monitoring the food distribution. 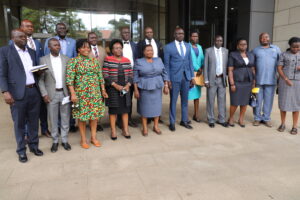 Others who attended the meeting included the Minister for Karamoja and her Deputy, Mary Gorretti Kitutu and Agnes Nandutu respectively.