The Prime Minister Rt. Hon. Nabbanja Robinah has held a meeting with a delegation from Iran and discussed issues to do with strengthening bilateral relations between the two countries.

“Uganda and Iran have cordial relations and our Presidents have exchanged visits in the past. We are grateful for the cooperation we have between the two countries and we would like it to grow,” said Nabbanja.

The Premier said that the two countries will ensure that they both prosper and create wealth. 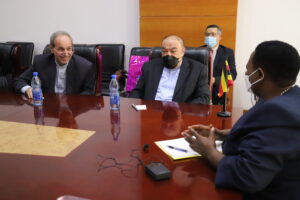 The delegation from Iran meeting the Prime Minister of Uganda

Nabbanja briefed the delegation that Uganda has a lot of good products which I believe the people of Iran would be happy to consume Uganda products such as Coffee, tea, fresh vegetables, fruits, milk, beef among others.

“We also have a lot of opportunities for investment like agriculture, agro processing and value addition, which the Iran business community is welcome to exploit here in Uganda,”  Nabbanja added.

She thanked the Government of Iran for partnering with Uganda and building the Iran-Naguru Hospital which has added services to our people.

The premier also said that they are aware of the unhelpful sanctions that were placed on Iran by some Western countries and hoped that the differences that exist will be resolved peacefully.