The Prime Minister Rt. Hon Robinah Nabbanja has called upon the public to protect the environment.

The Premier made the remarks during her visit to Nabiswera Sub-county in Nakasongola District on Saturday.

Nabiswera Sub-county was affected by flooding last year, which left 75 households, 5 schools, a health centre and plantations destroyed. The floods also cut off some roads in the area.

The Premier said the government was in the process of allocating land to settle the victims who were displaced and urged them to conserve the environment.

“Nature has reclaimed its territory. We have to respect nature”, Nabbanja said. 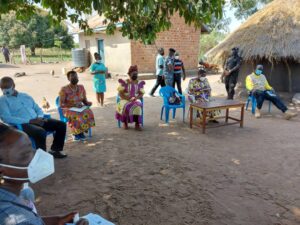 Rt. Hon. PM presides over a meeting during the inspection of flood victims in Nakasongola 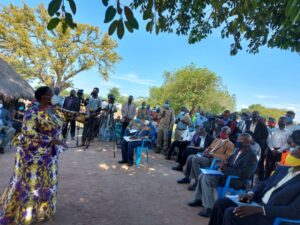 Rt. Hon. PM in a boat on a flooded road in Nabiswera Sub County Trading Centre

The Prime Minister also thanked the locals for supporting the NRM and highlighted that the government intends to eradicate poverty at the grassroots through the Parish Model.

She donated 2000 hand hoes as relief to the victims and noted that more relief items which include; 500 iron sheets, 500 mosquito nets, 500 blankets, 500 tarpaulins and food supplies are yet to be delivered.

The Minister of State for Luwero Triangle- Rwenzori Region, Hon. Alice Kaboyo pledged to monitor the implementation of the President’s directives in the area so that service delivery is enhanced.

The Minister of State for Health in charge of General Duties, Hon. Kawooya Anifa said she will ensure that the health centres in the sub-county are facilitated and equipped with adequate drugs to cater for the community.

The Minister of State for Works, Hon. Musa Ecweru said the roads that were cutoff will be worked on. He however, cautioned against shoddy work and misuse of road maintenance funds by the local leaders. END