Nabbanja was scheduled to commission this facility which was completed almost 2 years back and was funded by a loan from the World Bank constructed by Nile Establishments Uganda Limited. 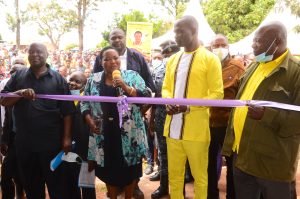 When the Prime Minister visited the facility she discovered that the Health Center had many defects including cracks in the ceiling, poorly done floor, the site was not well leveled leading to water logging.

“I’m not going to commission this Health Center because of the defects detected. The contractor was instructed some time back to rectify these defects but he has not heeded to the orders. I cannot commission such works where there is no value for money,” said Nabbanja.

Annet Asiimwe, the female District Councilor for Kitaihuka Sub county, and other residents expressed concern over the shoddy works and asked the contractor to rectify the defects so that they can start utilizing the facility.

“Our mothers continue to suffer yet the government spent millions of money to construct this facility but it cannot be put to use,” said Asiimwe.

Asiimwe said that the floor produces foam after being mopped just because it was poorly done.

“The ceiling is cracking, the toilet was poorly constructed, imagine using trees yet this is a facility meant to serve the people for years,” said Asiimwe.

She added that even the staff quarters were poorly constructed and have also developed cracks endangering their lives.

Bategeka Gonzaga, a resident of Kitaihuka said that they were happy that the Prime Minister refused to commission the facility because there was no value for money.

“Imagine we are still suffering with long distances going to Nalweyo, Kakumiro or Hoima yet the government has extended services closer to us,” said Gonzaga.

Moses Musaazi, the In Charge Kitaihuka Health Center III said that they continue to operate in a congested small facility because of the failure to commission the facility.

“We are still operating in a Health Center II facility and we are having many challenges in attending to patients who come to the facility,” said Musaazi.

The Prime Minister instructed the Kakumiro District administration to make sure the defects are rectified with the contractor or else he should be arrested.

However, the Prime Minister commissioned three other Health Center III’s at Kigando, Nkooko and Kabuubwa and asked the public to make use of these facilities because the government has invested a lot of money in them.

“These facilities are meant to serve you and if you don’t make use of them then the motive of the government in bringing services closer to the people will not be achieved,” said Nabbanja.

She asked expectant mothers to stop going to traditional birth attendants but rather go to the facilities for antenatal care and even deliver from health centers to reduce maternal mortality rates and infant mortality.

Uganda still registers at least 3 mothers dying as a result of birth related complications according to the obstetricians and gynecologists report of 2021.

Residents in these sub counties expressed their appreciation to the government for upgrading these facilities to Health Center III and also equipping them to serve the population.

The VHTs in the area are appealed to the government to consider them with some motivation so that they can serve the people well.

The RDC Kakumiro Maj. David Matovu warned the public against sabotage especially on programmes aimed at improving the livelihoods of the people.

The Prime Minister together with the State Minister for Transport Fred Byamukama also commissioned Kitaihuka Seed Secondary School to improve education in the area.

Byamukama, who also doubles as the Bugangaizi West Member of Parliament, asked the people in the area to make use of the school instead of taking their children to far way schools.

Andrew Mawejje, the Chief Administrative Officer Kakumiro assured the people of Kitaihuka that the government would construct a laboratory at the school but it still lacks staff quarters and other facilities.

By Robert Lwasa|2022-11-15T14:22:46+03:00November 15th, 2022|Categories: Featured|Comments Off on PM refuses to commission Health facility over shoddy works, Orders contractor to rectify the defects