The Prime Minister, Rt. Hon. Robinah Nabbanja has thanked the church for partnering with the state to enhance development in the country.

The Premier made the remarks at the Bishop’s Annual Appeal Fund (BAAF) fundraising activity which was held at Immaculate Heart Girls Secondary School Nyakibale in Rukungiri District on Saturday.

BAAF was founded by Rt. Rev Callist Rubaramira, the Bishop of Kabale Diocese in 2009 to raise funds for supporting diocesan investments and pastoral projects. Some of the projects that have been established since its foundation include; the construction of commercial buildings in the Districts of Kabale and Kisoro, construction of the Diocesan Golden Jubilee office block and setting up of Radio Maria at the diocesan headquarters among others.

This year’s BAAF project is geared towards raising UGX 2.5 billion for the construction of a 3-storeyed commercial building in Rukungiri District to contribute to the area’s economic development. 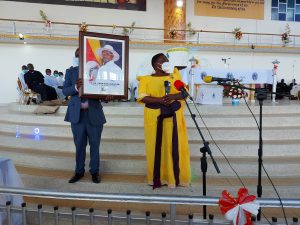 The Prime Minister who contributed UGX 50 million towards the drive and also auctioned President Museveni’s portrait at the event, urged the church to continue supporting government programs. She explained that the NRM government is still committed to delivering on its mandate as pledged in the manifesto.

The Premier also commended the electorate for supporting the NRM and asked them to embrace the ongoing COVID-19 vaccination programme in the country. She advised them to continue observing the COVID-19 Standard Operating Procedures.

The Government Chief Whip, Hon. Thomas Tayebwa pledged to solve the challenges being faced in the country by ensuring effective implementation of government business. Tayebwa contributed over ugx 15 million at the event. 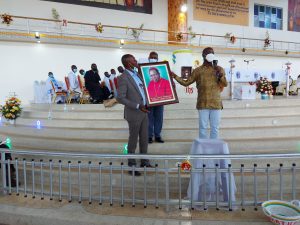 The Minister of State for Public Service, Hon.  Grace Mary Mugasa decried the high levels of corruption in Public Service and pledged to fight against the vice.

The Woman Member of Parliament for Rukungiri District, Hon. Medius Kaharata requested the government to consider the growing demand for clean and safe water in the area.

Over UGX 200 million was raised in both cash and pledges at the event. The function was also attended by the clergy, members of parliament and government officials among others. End.