This follows her an Impromptu visit to Gombe hospital where expectant mothers narrated to her that they are paying 100,000-300,000 for any caesarean section. 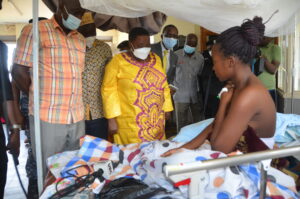 The impromptu visit by the prime minister followed a public outcry that Gombe hospital health workers do not work on weekends and are charging patients to access services.

After inspecting the facility the prime minister ordered that no patient should be charged money and that the leadership must streamline services there.

“Nobody should charge you any coin because this is a government hospital and the president has been categorical that those who want to charge people should start their private clinics not in a government facility,” said Nabbanja.

Nabbanja discovered that of the 54 mothers in the maternity ward majority had paid between sh100,000-300,000 in order to be attended to.

By the time the Prime Minister visited the hospital she found only a skeleton staff at the facility without any doctor apart from the intern doctor who was handling operations out of the 5 doctors posted to Gombe hospital.

She said that Butambala District Health officer has been the Acting Medical Superintendent at Gombe Hospital yet he is supposed to supervise the work at the same facility.

Most mothers in the maternity ward had undergone a caesarean operation but asked to pay money before the service.

Residents of Butambala said that Gombe Government Hospital has become a money minting venture for the health workers who are even hiding government drugs so that patients can buy.

“If you don’t have money you cannot be attended to. The only thing they can give you is Panadol after waiting for the whole day,” said one patient who had a sick child.

Nabbanja ordered for a forensic audit of the hospital to ensure that the people in the area benefit from the government instalment.

Dr. Daniel Kyebayinze, the Director Public Health at the Ministry of Health said that indeed there are gaps in service delivery at Gombe hospital and promised to rectify the situation.

“It is true we discovered many gaps in service delivery at Gombe Hospital but I want to assure the public that as a government we shall put everything right as soon as possible,” said Kyebayinze. 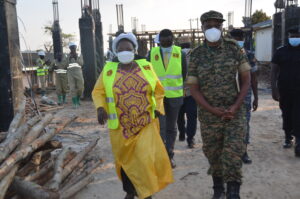 The Prime Minister Inspecting construction works by the Engineering Brigade of the UPDF at Gombe Hospital.

The Prime Minister also inspected construction works by the Engineering Brigade of the UPDF and was happy with the quality of work being done at Gombe hospital.

She also visited Gombe Secondary School and appealed to students to live within their means but also be disciplined and work hard.

“I want to appeal to you to be disciplined, work hard in class but also live within your means. If you can go by this I assure you the sky will be the limit,” said Nabbanja.

The Prime Minister also invited Butambala District Health Officer to report to her office in Kampala on Tuesday.