The Minister of Health, Dr Jane Ruth Aceng has thanked the Prime Minister for mobilizing resources with the community to construct a health facility to cater for the vulnerable people in Kakumiro District.

The Minister made the remarks during the commissioning of Mpasana Health Centre III in Kakumiro District on Friday September 03, 2021.

The Health Centre was built by the Prime Minister who is also the Woman Member of Parliament for Kakumiro District, Rt. Hon. Robinah Nabbanja with support from the community of Mpasana.

In her speech, Dr Aceng said the health centre will reduce maternal and child mortality and pledged to ensure that the facility is equipped.

“I will ensure that the beds and the necessary equipment are put in the facility. I request the Chief Administrative Officer to recruit health workers to work in the facility,” Aceng said.

She also thanked the Prime Minister for her vision of ensuring that the residents of Kakumiro are healthy and thus urged the locals to support her.

The Minister called upon the public to prevent the spread of COVID-19 by observing the Standard Operating Procedures and getting vaccinated. She highlighted that the country has received enough vaccines to cater for 27 million people and urged the community to get vaccinated.

“The vaccines are safe and effective. The vaccines will protect you from severe disease,” the Health Minister said.

She appealed to the health officials and the residents to take good care of the facility. 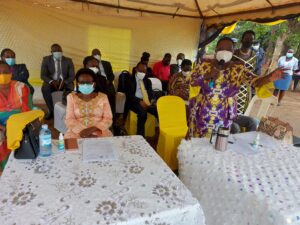 The Prime Minister and also Woman Member of Parliament for Kakumiro District, Rt. Hon. Robinah Nabbanja said the health facility was constructed to enhance access to healthcare in the area.

She noted that her main task was to mobilise funds for the construction of the facility, while the community members focused on providing resources in form of manpower, sand, food for the labourers and supervising the construction project among others.

The Prime Minister handed over the health centre to the Ministry of Health for official management on behalf of the government. The facility which cost over UGX 60 million will provide several services including maternity and immunization services.

Nabbanja cautioned the health officials against engaging in practices of drug theft. She asked the community to use and take good care of the facility.

The Prime Minister also asked the citizens to embrace the Parish Development Model, noting that it will improve livelihoods in the area. She, however, called for transparency in implementing the project.

The function was also attended by the Minister of State for Transport, Hon. Fred Byamukama, the Minister of State for Water, Hon. Aisha Sekindi, the Director-General of Health Services, Dr. Henry Mwebesa, the Under Secretary Office of the Prime Minister, Rose Alenga, the Commissioner for Planning in the Ministry of Health, Dr. Sarah Byakika, Members of Parliament and the District Local Government officials among others. End.

Tweets by OPMUganda
Go to Top