The Health Centre was constructed by the Uganda Red Cross Society using government funds donated through the Ministry of Health. The facility will serve the Bugisu sub-region landslide victims who were relocated to Bunambutye Resettlement Camp. 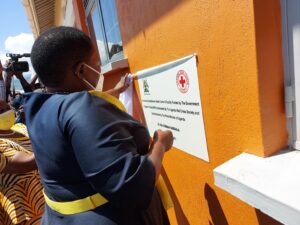 In her remarks, the Premier thanked the Uganda Red Cross Society for effectively utilizing the government funds to construct the health facility. She said the Health Centre will be well equipped to serve the community and urged the locals to embrace and own the project.

She also thanked the landslide victims residing in Bunambutye Resettlement camp for cooperating with the government during the resettlement exercise.

“Thank you for allowing to resettle in Bulambuli District, Bunambutye sub-country. Thank you for your cooperation because without it the government efforts to resettle you here would have been futile,” Nabbanja said.

She noted that the next phase of NUSAF in the area will be focused on ensuring that the people get value addition for their products.

The Prime Minister made a clarion call to the citizens to get vaccinated against COVID-19 and observe the COVID-19 standard operating procedures.

“COVID-19 is real. Continue to observes the SOPs. If you get an opportunity, please go and get vaccinated. We cannot say we are safe until we are all safe. Please embrace the vaccination program,” the Prime Minister said.

The Minister of State for Health in charge of General Duties, Hon. Anifa Kawooya said the Health Centre III was already coded and will be funded by the ministry of health. She asked the health officials and the locals to take care of the facility and keep it clean. 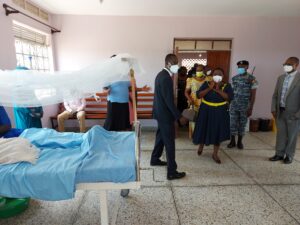 Kawooya also thanked the Uganda Red Cross Society for its humanitarian response to public health emergencies and for demonstrating good working relations with the government.

The Minister of Karamoja Affairs and also Woman Member of Parliament for Manafwa District, Dr Mary Goretti Kitutu noted that there is a need to treat the Bugisu sub-region as a hard to reach area due to its mountainous terrain and thus requested the government to at least consider constructing two health centres in the area annually.

The Minister of State for Karamoja Affairs and also Woman Member of Parliament for Bududa District, Hon. Agnes Nandutu requested the government to consider upgrading the different health facilities in the Bugisu sub-region.

The function was also attended by the District Local Government leaders and area Members of Parliament among others. End.