The Prime Minister of Uganda Robinah Nabbanja on Sunday evening made an impromptu visit to Ngoma Health Center IV in Nakaseke District only to find 4 staff out of the over 48 that were recruited at the facility.

Nabbanja while at a fundraising drive for the completion of Kinoni Anglican Church in Kinoni Sub County was briefed by leaders that the health workers at Ngoma have abandoned their work.

Nabbanja, infuriated by such reports, decided to make a visit to the facility to confirm the allegations.

At around 5:30 PM, Nabbanja in company of the area Members of Parliament went to the facility only to find four junior health workers on duty. 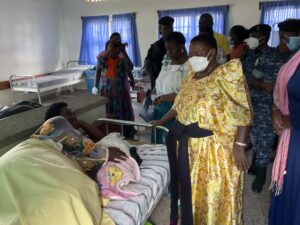 The Prime Minister was annoyed by the absence of health workers after making a roll call and established that only 4 junior health workers were at the facility at the Out Patient Department while the two doctors and the clinician were absent.

She ordered an emergency meeting to iron out the challenges at the facility.

Geoffrey Kiiza, the LC III chairperson Ngoma told the Premier that health workers have turned the facility into a private one by asking patients to pay for the services they get there.

“Our people must pay at the government facility to access services and we have no alternative,” said Kiiza.

The leaders asked the Prime Minister to prevail over the health workers because some people cannot afford to pay for services. 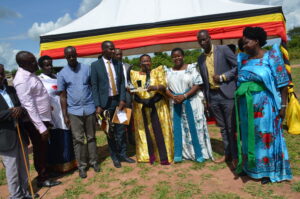 Rt. Hon. Nabbanja receiving a present from the leaders of Ngoma

While addressing the people of Kinoni earlier in the day Nabbanja appealed to the people to educate the girl child so as to address the challenges women are facing.

The people of Nakaseke told the Prime Minister that there is a big problem of land grabbing and the poor road network that is affecting their livelihoods and appealed to the government to intervene.

The premier ordered the Resident District Commissioner to ensure that land grabbers are not entertained in the area and should take action.

She invited the leaders of Nakaseke to her office in Kampala to discuss how they can improve service delivery in the hard-to-reach district.

During the fundraising drive, a total of 35 million shillings was realized in cash and the Prime Minister donated 200 iron sheets towards the completion of the Church. 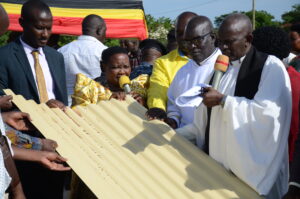 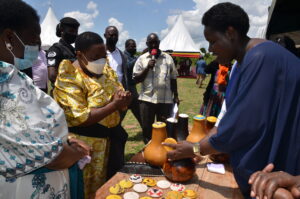 Women from Kinoni showcasing how they make cow butter to the Prime Minister Rt. Hon. Nabbanja