MOROTO – The Office of the Prime Minister (OPM) has launched a handbook aimed at promoting good governance and accountability at the District Local Governments (DLGs) level in Northern Uganda.

Titled, “Laws, Policies and Regulations on Accountability, Public Resource Management and Gender Inclusion at the Local Government Level in Uganda,” the handbook was launched by the State Minister for Karamoja Affairs, Hon. Agness Nandutu, in Moroto on December 2, 2022.

It was produced by Konrad-Adenauer-Stiftung (KAS) and partners under “Strengthening Performance and Accountability through Community Engagement (SPACE)” project. SPACE is a grant under the Development Initiative for Northern Uganda (DINU) programme supported by the European Union and supervised by OPM.

The Minister hailed KAS and partners for building capacities of the DLGs and supporting on-going efforts to improve accountability and performance of the targeted districts.

“I thank KAS and partners under this DINU grant for working closely with the DLGs to improve accountability and responsive service delivery. We see that the communities have been empowered to raise and seek solutions to their concerns. These efforts shall enhance the effective use of public funds across a range of sectors from healthcare and education to infrastructure, which are also government priority areas in Northern Uganda,” she said.

She added: “I’m happy that the project is addressing issues that affect the ordinary citizens. These are akin to the People’s Parliament discussions that I used to chair before I joined politics. I think SPACE project needs more space. It should cover the entire country.” Minister signs on the dummy copy of the handbook she launched

The DINU National Programme Coordinator, Ms. Pamela Kabahesi said KAS was one of the four partners implementing the good governance action under DINU.

“KAS is a key partner under good governance and I’m confident that the handbook produced by the SPACE project will serve our Local Governments very well,” she said.

KAS and partners have been working with the DLGs through SPACE to promote accountability and civic spaces in Northern Uganda. Over the past years, the region has emerged as a strong aspirant to the restoration of civic structures, improvement of service delivery and advances in inclusive economic development through government-led interventions.

KAS and its partners have made this handbook available to all Local Government actors –public servants, opinion leaders, elders, citizenry, and all civil society actors in the targeted six districts of Arua, Gulu, Lira, Moroto, Amulia and Napak.

The handbook was translated into five local languages of Acholi, Langi, Lugbara, Ateso, and Ngakarimojong. It documents the laws and policies governing the functioning of DLGs and community participation in the decision making processes. It is available both in hard copies while soft copies can be found at www.kas.de/uganda and www.dinuspace.org/publications. 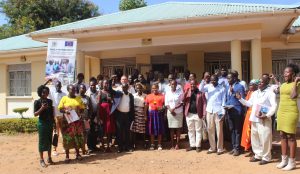 The KAS team said: “We extend our special recognition to the Government of Uganda, District Local Governments, Office of the Prime Minister and the European Union for your invaluable support in compilation and publication of this handbook.”

“It is our hope that, through this resource of legal references, we shall further strengthen and improve the efficiency and effectiveness of the governance of local government councils at both the higher and lower levels. Above all, we wish to see this contribute to building democratic and accountable local governments and to improving service delivery to the people of Uganda,” they added.