Saturday September 4, 2021
By: Joyce Babirye
Government has embarked on a sensitisation drive for district leaders in areas prone to disasters to encourage them to make  Disaster preparedness and management a key component in their respective district plans.
The exercise is based on the National Disaster Risk and Vulnerability Atlas that highlights the top 7 natural disasters the country is prone to and the exact areas that are at risk. The atlas also proposes key measures to prevent and respond to assist communities affected.
These key disasters include drought, floods, lightening,  hailstorms, Landslides, windstorms and earthquakes
The first phase of the exercise commenced on 1st September, 2021 in Kisoro District, followed by Rubanda and Kabale in the first week. Next week the exercise continues in  Rukungiri, Rukiga and Kanungu districts. 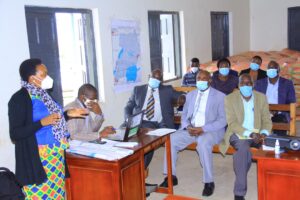 The Principal Disaster Management Officer in the Office of the Prime Minister Catherine Ahimbisibwe noted that disasters are on the increase in the country because local governments’ plans lack a disaster management component which delays timely response interventions and implementation of early warning systems to disasters. This sometimes leads to deaths, destruction of homes, roads and other infrastructure. 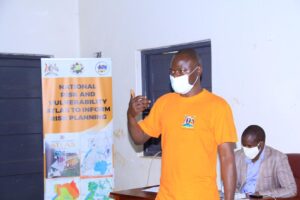 Emmanuel Okecho, a Disaster Management Officer also emphasized the need for district authorities to always refer to the National Emergency Coordination Centre (NECOC) to ascertain whether the proposed areas for their projects are safe for them, to avoid their destruction by disasters.
Kisoro, Rubanda and Kabale District Chairpersons Abel Bizimana, Steven Kasyaba respectively expressed gratitude to government for the initiative to profile Disaster prone areas as a basis to inform districts’ planning. They called for the decentralisation of Disaster response to include a disaster focal person at every district to ease response. END.
By Robert Lwasa|2021-09-04T07:38:21+00:00September 4th, 2021|Categories: Disasters, Featured|0 Comments

Tweets by OPMUganda
Go to Top