Health workers have tasked the government to strengthen interventions aimed at reducing the high maternal mortality rate in the country.

Through their umbrella body; Association of Obstetricians and gynecologists of Uganda (AOGU), Prof. Waiswa Peter from Makerere University School of Public Health says that the country still experiences maternal deaths that would otherwise be prevented.

During their 17th Annual Scientific Conference held at Golf Course Hotel in Kampala, Prof. Waiswa expressed concern that 6,000 maternal deaths occur in Uganda every year and majority of these deaths are in Kampala.

Prof. Waiswa said that most causes of these maternal deaths can be handled by government because they are structural as illustrated in the figures below: 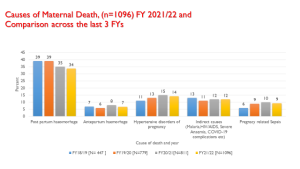 The health workers asked government to ensure that hospitals are prepared to handle emergencies at all times.

The causes of maternal deaths that are flimsy include lack of blood, no sutures, lack of gloves, power shortage and sometimes no anesthesiologists.

The Prime Minister Robinah Nabbanja while responding to the requests from health workers assured them that the government was committed to ensure that reproductive health issues are addressed. That was the reason the President Museveni emphasized the enhancement of  salaries for health workers.

Nabbanja said that government had embarked on a nationwide programme of upgrading health centers to ensure they serve the people.

However, she challenged health workers not to be moved by money gain but rather offering services to the people.

Dr. Lawrence Kazibwe commended government for making important strides in improving health service delivery in the country especially by enhancing salaries of the health workers that had gone ahead to motivate them to deliver.

The conference ran under the theme: “Securing the reproductive Health future of women in Uganda”.