How NUSAF has changed lives in Northern Uganda

The Third Northern Uganda Social Action Fund (NUSAF3) came officially to a close on June 30th 2021 after five years of implementation from March 2016.  This marked the deadline by which all the 130-million-dollar funding for the Project from a World Bank IDA loan, must be absorbed and spent.  The planned closing date was originally 31st December 2020, however, implementation was slowed down in 2020 due to the COVID-19 pandemic which necessitated a no-cost extension to the closing date of 30th June 2020.

The Project carried out the last joint review mission of the Government of Uganda and the World Bank from the 4th to 8th June 2021.    The mission concluded that the Project had fulfilled its Project Development Objective with an overall satisfactory rating from the World Bank. The review mission was pleased to note that the Project impact evaluation results gave clear indications of the Project impact with the result indicators having been achieved or overachieved.  The challenge of COVID19 impacted the Project and the renewed restrictions in the month of June, affected the completion of pending activities and utilization of the final disbursement. 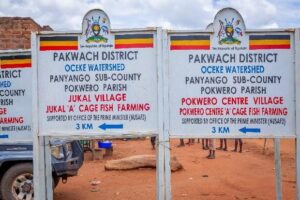 All funds from the World Bank (WB) and the JSDF were withdrawn and disbursed and a total of over UGX 346,312,756,254 was disbursed to the communities.  The Districts and communities have so far accounted for 99.44 percent of the funds received, the remaining balance is being utilized and is expected to be accounted for to one hundred percent.

The joint mission noted that there still remained a number of outstanding activities including financial accountabilities from the districts that were affected by delays in getting a supplementary budget approved by Parliament.  The mission was also satisfied that a sustainability plan had been put in place for the various interventions of NUSAF3.

The Project had planned to benefit 2,995,500 poor or vulnerable persons but exceeded this goal by reaching 3,031,690 persons.  Female beneficiaries made up 59 percent of the beneficiaries, surpassing the planned target of 50 percent.  Youth were also reached by the Project (though this was not included in the indicators) and made up 33 percent of the targeted poor beneficiaries.

Under the component of Livelihood Investment Support (LIS), the Project planned to fund 7,700 income generating community enterprises (groups) and achieved 9,447 (123% of target).   The project also tested a village revolving fund (VRF) approach that provides ten thousand dollars to a village as a capital for groups to borrow from and pay back to. This was a highly successful model that reached 425 villages (or 1,470 groups) and helped inform the recently launched Government Parish Development Model. 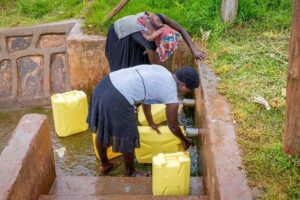 The completed Project Impact Evaluation studies indicated a growth in household monthly incomes from UGX 98,636 in 2017 to UGX 178,147 among NUSAF3 Project beneficiaries (MUBS – NUSAF3 – Project Evaluation Report, April 2021).  This growth is attributed to increased enhanced capacity of households to produce subsistence surplus as well as improved business skills and marketing.  The project also promoted a culture of savings among the beneficiaries.  Voluntary savings among the communities accumulated to over 41 billion shillings as at 6th April 2021, which have become a source of alternative capital for reinvestment and diversification at a lower cost repayment rate. 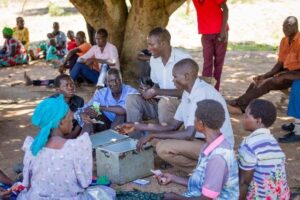 NUSAF3 has achieved several other notable achievements, some of which will only be briefly mentioned here.  The sub-component of Disaster Risk Financing is a novel approach that provided an early warning mechanism together with a proactive response to disasters (such as drought) in order to support beneficiaries to cope and build resilience.  The Project was awarded a “KNOWBEL” accolade by the World Bank for leading internationally with this approach and for its highly successful roll out.

Another major achievement included strengthening transparency and remedies against corruption and ensuring accountability by including the Inspectorate of Government (IG) in the implementation of the Project.  Due to this arrangement, over 410,087,450 of potentially diverted funds were recovered and corruption minimized.  The system of community monitoring set up under NUSAF3 through the office of the IG, is now a model that is to be adapted nationally.

In addition, NUSAF3 also helped to support and fund the development of the national Single Beneficiary Registry (SBR) database server in the Ministry of Gender, Labour and Social Development.  This database and management information system (MIS) is planned to become the starting point for the registration of all beneficiaries of Government social protection programmes.

NUSAF, beginning with the second and third phase, pioneered a guided community procurement approach whereby the communities undertake procurement for themselves at the local level rather than have the Government do it for them.  This approach has proven to be more efficient, less expensive, ensures transparency, empowers communities and promotes a sense of responsibility as well as ownership. 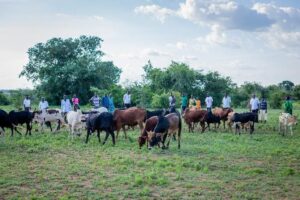 NUSAF3 Community with animals they procured

Early in 2021 the Project held consultations with the newly elected district leaders and Members of Parliament to review the impact of NUSAF3 and to obtain feedback on lessons learnt.  There was great appreciation of the contribution and impact NUSAF3 has made to the development of Greater Northern Uganda that benefited forty-two percent of the 5.9 million poor people in the Project area that covered 67 districts.   Though it was also noted that poverty levels still remain high in the North of the country and recommendations were made for a successor project.  END