Nobody shall frustrate government efforts to develop oil – Tayebwa

The deputy speaker of Parliament, Rt. Hon. Thomas Tayebwa has warned that no activist will frustrate the development of oil and gas in Uganda.

Tayebwa was representing the Speaker of Parliament Rt. Hon. Annet Anita Among who had been invited as chief guest.

Tayebwa, while presiding over the belated Kakumiro District Women’s day celebrations at Kakeeka play ground in Kakumiro Town Council said that some people want to hide in environmental concerns to frustrate government’s efforts to develop the oil and gas sector. “As Parliament, we shall not allow anybody to frustrate government efforts to develop its oil sector,” said Tayebwa.

He said that Africa contributes less than 3% of world carbon emissions and the so called environmentalists are making noise over the crude oil pipeline and development of oil and gas.

Tayebwa lashed at some countries that were sabotaging Bujagali Hydro power dam construction in the guise of protecting the environment but when electricity was insufficient many companies packed and went away claiming there wasn’t enough electricity.

“When government wanted to develop Bujagali Hydro Power Dam, many people wanted to fail government in the guise of environmental protection,” said Tayebwa.

Tayebwa says that if oil companies do not want to invest in Uganda, the country has the capacity to mobilise its resources and develop the sector.

He said that government adhered to all the set standards while doing the environmental and social impact assessment so there is no need of disturbing the set projects.

In February 2022, President Yoweri Museveni lashed at some Non-Governmental Organisations which he said have continuously criticized government over activities underway for the East African Crude Oil Pipeline (EACOP).

In April last year, an alliance of over 260 African and international environmental and human rights organizations claimed another win in their campaign to stop the construction of the oil pipeline.

Tayebwa said that the government of Uganda has mobilized money for the Parish Development Model (PDM) and other projects and can use the same strategy to mobilise resources for oil development.

“Oil is an investment that is lucrative and if the financiers let us down we shall invest as a government,” said Tayebwa.

He said that no one should think that they can use their money to bulldoze us from developing our projects especially oil and gas. 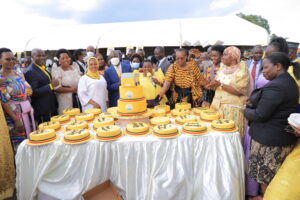 The Deputy Speaker also flagged off the distribution of motorcycles to LC III chairpersons in Bunyoro sub region where 134 Yamaha brand new motorcycles were handed over to the 8 Districts and one city in Bunyoro.

Government has procured 2,227 motorcycles for LC III chairpersons to be distributed countrywide.

Earlier on in the day the deputy speaker unveiled a foundation stone for the construction of the NRM district administration block for Kakumiro District. 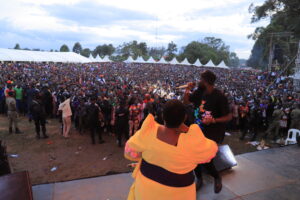 The Prime Minister Robinah Nabbanja who also doubles as the Kakumiro District Woman Member of Parliament said that Women’s Day is used to reflect on what women are engaging in and also give them tips on household income, savings, how to manage social issues and also advocate for peace in homes.

The function that begun with holy mass celebrated by Msgr. John Mary Kabyanga was attended by over 12 Ministers and 100 Members of Parliament realised over sh300m cash for the construction of the NRM offices for Kakumiro District.

President Yoweri Museveni contributed sh60 million towards the noble cause.

As per of the events to celebrate Women’s day at least 503 people were attended to during the eye treatment health camp and 73 people were operated upon with cataracts and gained sight after several years of blindness.