ABIM – The security situation in Karamoja Sub-region is set to improve following the construction of the seven community police posts and accommodation facilities for police officers.

The facilities are being constructed under the Development Initiative for Northern Uganda (DINU), a government programme supported by the European Union and supervised by OPM.

According to the DINU Programme Engineer Eliseo Oyoo, construction works are currently at about 85% and the facilities are expected to be ready by the end of this month. 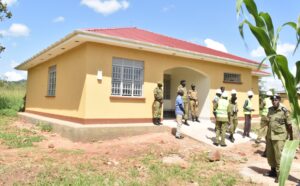 “The contractor for Morulem in Abim District will soon start electrical installation and plastering. The rest of the contractors have finished roofing and will start plastering works,” he said.

He was speaking during a field monitoring of the construction works of the community police posts and accommodation facilities by the Uganda Police Force team in Abim and Kotido districts recently.

“Each of the seven police posts shall be equipped with solar power, furniture, two motorcycles to support officers’ transport, water harvesting system and a borehole. The total support to Uganda Police Force (UPF) is estimated at Shs5.4b,” he said.

The seven police posts and accommodation facilities are part of the OPM support to Uganda Police Force (UPF) to improve safety and security in order to promote socio-economic development in the sub-region.

It should be recalled that the security situation in Karamoja Sub-region is still marred by incidents of raids and attacks on communities. This is therefore a very timely intervention which will contribute tremendously to reducing the incidents of insecurity in the sub-region.

Senior Commissioner of Police Timothy Halango, who is also the deputy director of Research, Planning and Development at the UPF, said Karamoja has had a long history of insecurity, which has led to low levels of development in the area.

One of the two accommodation blocks at Morulem is ready for occupancy.

He, however said the security situation in Karamoja will greatly improve because the posts and accommodation facilities will increase police presence in the area since the facilities have majorly been established in the blackspots for warriors and raiding activities.

“I would like to thank Office of the Prime Minister and the European Union for continuously supporting police over the years, especially in Karamoja Sub-region. Your intervention has greatly enabled UPF to have tremendous achievements as far as enforcement of law and order is concerned,” he said.

The Development Initiative for Northern Uganda (DINU), a Government of Uganda programme supported by the European Union and supervised by Office of the Prime Minister, was initiated in 2017. The EURO 150.6 million (about Shs597b) multi-sectoral integrated programme covers interventions in three interlinked sector: (1) food security, nutrition and livelihoods, (2) infrastructure (transport, logistics, water, energy) and (3) good governance. DINU is implemented in 41 districts in the five sub-regions of Acholi, Karamoja, Lango, Teso and West Nile for a duration of six years.