The Prime Minister, Rt. Hon. Robinah Nabbanja has condemned the acts of impunity committed by the Balaalo community in Northern Uganda. She noted that the government does not tolerate impunity and neither does it support people who engage in criminality.

“Uganda is democratic and nobody is above the law. The Government is not behind the people who are invading you. They are doing this on their own,” Nabbanja said.

The Premier made the remarks while meeting the District leaders of Northern Uganda to discuss the issue of the Balaalo (nomadic pastoralists) living in the sub-region as directed by the President.

Museveni condemned the Balaalo community describing them as ‘indisciplined and inconsiderate actors’ who allow their cattle to graze in other people’s gardens and also generate political misunderstandings among Ugandan communities.

The President also denied any association with the Balaalo community in committing acts of indiscipline as it been alleged by the victim communities that the government was encouraging them to commit aggression against other communities.

“These people have no moral right nor justification to do what they are doing. The NRM never forgets. These Balaalo are either non-Ugandans coming from neighbouring countries or indisciplined Ugandans that sold the land we gave them and are now disturbing other Ugandans. They should, therefore, not be tolerated,” the President’s letter read in part.

According to the Prime Minister, the President cited district leaders as liable for the Balaalo issues in the area because they failed to use their authority to impede the acts of the Balaalo. He queried why leaders such as the District Veterinary Officers did not stop the illegal movement of cattle in the area, while others like the Resident District Commissioners failed to report it before escalation.

The Minister of State for Internal Affairs, Hon. Gen. David Muhoozi commended the community leaders for taking the initiative to protect the land of the locals from being forcefully grabbed by the Balaalo.

He added that the Balaalo issues are generic and people are taking advantage of that to grab land. He thus called for the naming and shaming of the culprits.

“It is high time we name and shame instead of saying it is the government! Who are they? Name them because these people are committing impunity by grazing their cattle on people’s land and the police are doing nothing. Name and shame the collaborators,” Hon. Gen. Muhoozi said.

The Minister of State for Labour, Employment and Industrial Relations, Hon. Charles Engola said the government is committed to fighting insecurity and shall not tolerate anyone who wants to threaten the existing peace in the country.

“You should be candid in providing information regarding the Balaalo issues because we want to have peace in this country. Nobody should play with security in this country, we want everything to be smooth,” the Minister said. 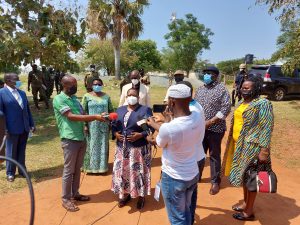 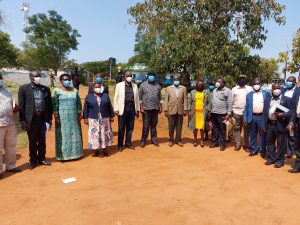 The Minister of State for Animal Industry, Hon. Bright Rwamira inquired about who was giving protection to the Balaalo to commit acts of impunity as it had been alleged by the district leaders.

The Minister of State for Northern Uganda, Hon. Grace Freedom Kwiyucwiny called upon the leaders in the sub-region to focus on social-economic transformation.

According to the district leaders’ report, the Balaalo in the area are armed and forcefully grab the locals’ land. The meetings were also attended by the security officers and area members of parliament among others. END.