The continued absence of Members of parliament from Wakiso District to sit on the District Roads Committee (DRC) has led to failure by the district to maintain roads.

The Chief Administrative Afficer Wakiso,  Alfred Malinga while appearing before the accountability meeting for Wakiso at Uganda National Roads Authority (UNRA) office on Saturday, revealed that the district has over sh1.3bn on account for road maintenance but it can’t be spent because the DRC has not met to plan for it.

“Our main challenge is the absence of Members of Parliament on the roads committee, many times we invite them but they keep postponing. And I want to assure you, this financial year ending 2021/2022 we had an audit query of non-functionality of the DRC. These MPs are the ones letting us down on the maintenance of roads,” said Malinga.

Malinga added that the district had the money for the second quarter but the committee only sat on Wednesday but again only two Members of Parliament turned up and they couldn’t make quorum.

The Councilors expressed concern that roads are impassable yet money was idle on the district account leading to tarnishing the image of the government that it does not release money to districts.

Wakiso District is the largest district in the country sitting on over 1907 Square kilometers bearing over 550km of roads.

However, many roads in the district remain undone and in a sorry state despite the huge budgetary allocation over other Districts in the country.

Wakiso got over sh4.6bn for the financial year 2021/2022 and currently over one billion shillings meant for road works is idle on the district account.

Timothy Mukunyu, who represented the Executive Director Uganda Road Fund said that the DRC is responsible for approval of Annual Road Maintenance Programs (ARMPs), Prioritization of planned quarterly road works, Oversight over the implementation of the road maintenance programs; Approval of all accountabilities for road maintenance funds and Revision of ARMPs.

Therefore, when the DRC does not sit, all road activities in the district are put to a halt.

During the meeting, the Prime Minister Robinah Nabbanja ordered for an extensive forensic investigation into road funds spent in Wakiso District for the past and current financial years.

“There is a need to investigate how the money sent by the central government to Wakiso District was spent for last financial year and even the current year because there are glaring gaps identified already,” instructed Nabbanja.

For Entebbe Municipality, the Engineer Christine Nanfuka was grilled to show how the funds released for road maintenance only to discover that some roads she claimed were worked on were in a sorry state and not maintained at all.

Sulait Ssempeera, a Councilor at the Municipality told the meeting that roads appeared only on paper that they were rehabilitated yet on ground there was no work done.

Ssempeera pointed out that one road being claimed to have been worked on near the Entebbe Kitooro Taxi park Access measuring 0.25km at a cost of sh.34.6m was never worked on as alleged in the accountability. 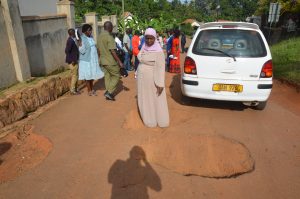 Hajjat Minsa Kabanda, the Kampala Affairs Minister looking at a pothole on Yusuf Lule Road in Entebbe Municipality that was alleged to have been worked on in the last financial year

Sh. 496m was allegedly spent on Yusuf Lule Road maintenance which was refuted by the councilors which prompted the Prime Minister to send the Kampala Minister Hajjat Minsa Kabanda to establish the facts on ground.

The Engineer identified as Nanfuka Christine and the Town Clerk Entebbe Municipality Charles Magumba were handed over to police to record statements for misuse of government funds meant to work on roads. 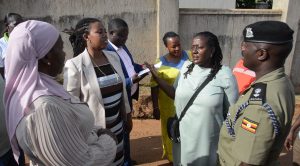 Christine Nanfuka, the Entebbe Municipal Council Engineer trying to explain to the Kampala Miniter Hajjati Minsa Kabanda in the presence of the Entebbe RDC and other councilors on one of the disputed roads in Entebbe

However, the Town Clerk Entebbe could not be traced at the time the order was issued.

In Entebbe Municipality, residents said that there was no value for money in the works that were being implemented in the area.

Resolutions made at the meeting:

On the issue of Delayed utilization of funds for rehabilitation of district roads due to failure to convene DRC Meetings, it was resolved that the Prime Minister writes to the Members of Parliament to interest themselves in issues affecting service delivery in their areas especially roads and also appreciate the importance of attending District Roads Committee meetings.

It was also agreed that whatever amount of funds released by the Government for repair of roads should be used for what it was planned for and also made public for the people to make followup.

Undertake on spot inspection of the mentioned roads to verify works done and current state on Kawanda-Kiteezi-Lutete Road (that 28m was spent) the road was never rehabilitated, Kiteezi-Kiti-Buwambo Road, only Kitagobwa to Buwambo part was repaired the rest was not worked on and Kitetika-Masooli was not worked on.

The other roads to be visited include Kyoga to Banda which is impassable, Kakiri Town Council Southern Bypass which is reported as worked on is impassable, Kajansi Town council, the road from Maya-Bulwanyi (Ushs13m) and Kyengera kajansi, Kitovu-Sisa are impassable.

However, it was revealed that the inadequate road equipment to work and keep the roads motorable was also affecting service delivery among others.

To the dismay of all the leaders who attended the meeting, all Members of Parliament including the District Chairman LC V did not attend the accountability meeting.

In her remarks, the Prime Minister Nabbanja noted that some government workers were conniving with politicians to portray that the government does not release funds to districts yet it was being mismanaged.

“We shall not accept to shift the blame to the central government yet you people on ground are abusing your offices and misusing government funds to taint the image of government,” said Nabbanja.

She said that whether the leaders are from whatever party, the people being served are Ugandans and the NRM government will serve all of them regardless of their political affiliations.

Nabbanja ordered for a forensic audit of Wakiso District and the Municipalities and Town Councils therein to establish whether there was value for money in works being done there.

By Robert Lwasa|2022-11-09T17:49:21+03:00November 9th, 2022|Categories: Featured, Uncategorized|Comments Off on MPs blamed for the poor state of roads in Wakiso, Entebbe Municipal Engineer arrested