The President of the Republic of Mozambique, His Excellency Filipe Jacinto Nyusi has commended the development that has taken place in the Luwero Triangle since the liberation struggle, noting that “the land which was in the past the birth of liberation, is now the birth of development.”

The President of Mozambique made the remarks during his visit to Kapeeka Industrial park also known as Liao Shen Industrial Park Co. Ltd in Nakaseke District on 28th April 2022. 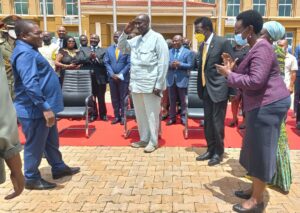 He noted that he will send a team of experts to acquire more knowledge on setting up industrial parks, a project which has started in Mozambique.

“We are happy to see industrial parks like these in Uganda. We did not bring our team of experts but we will certainly do so and build economic firms like these in Mozambique,” Mr Nyusi said.

President Nyusi also thanked President Museveni for his continuous support to Mozambique geared towards maintaining peace and stability. He revealed that during his private conversation with President Museveni, they discussed how they can support and empower the veterans who participated in the liberation struggle.

The Minister of State for Luwero-Rwenzori Triangle, Hon. Kaboyo Alice commended the role and contribution of Mozambique towards the NRA Liberation Struggle.

The Coordinator of Operation Wealth Creation, Gen. Salim Saleh warned citizens against soliciting bribes from investors, noting that it undermines investment in the country.

H.E. Filipe in a group photo with some officials who attended the event at Liao Shen Industrial Park Co Ltd