The Minister for General Duties Justine Kasule Lumumba has asked implementing partners (IPs) of the Development Initiative for Northern Uganda (DINU) to ensure that they implement projects that aim to improve lives of the people in the beneficiary districts in Northern Uganda.

DINU, an affirmative action programme of the Government of Uganda, supported by the European Union and supervised by Office of the Prime Minister (OPM), is implemented in 41 districts in the five sub-regions of Acholi, Lango, Karamoja, Teso and West Nile. The DINU overall goal is to: Consolidate stability in Northern Uganda, eradicate poverty and under-nutrition and strengthen the foundations for sustainable and inclusive socio-economic development. 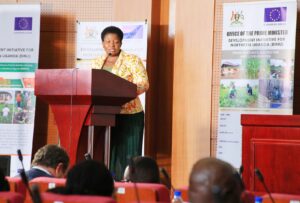 The Minister was on October 28, 2022 presiding over the DINU coordination meeting between Ministers from Office of the Prime Minister and implementing partners at Office of the President Conference Hall in Kampala.

Minister of State for Northern Uganda Affairs Grace Freedom Kwiyucwiny, Minister of State for Karamoja Affairs Agnes Nandutu, Head of Cooperation at the European Union Delegation in Uganda Caroline Adriaensen, and representatives from Ministry of Finance Planning and Economic Development, and Local Government ministry attended the high-level meeting that attracted more than 50 participants who included DINU projects coordinators and officers.

The meeting was organized by OPM Programme Management Unit under the theme: “Progress update on implementation of the DINU programme.” The DINU IPs presented progress reports that showed that significant achievements have so far been made in the targeted districts in Northern Uganda across the DINU objectives. 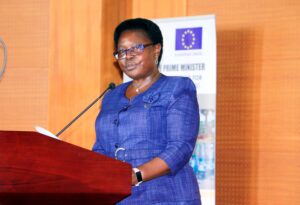 During implementation, Minister Kasule asked the DINU IPs to continue focusing on high quality outputs and coordination with the respective district local governments.

“As OPM, we expect the implementation of the various activities to be of very high standards as you continue to implement and that you also synergize with other interventions in the sub-regions and districts of Northern Uganda.  Coordination with the district local governments and partners of GoU-entities for the programme actions and sustainability is of key importance,” she explained.

Noting that while some projects are ending this year and others next year, the Minister told DINU IPs: “OPM expects that the actions and interventions under the IP-contracts are properly and accurately closed and handed-over to the relevant and appropriate GoU-entities at national and local level in accordance with the DINU programme objectives as well as the requirements of the contracting authorities such as EUD, Ministry of Finance/NAO and OPM/GoU.”

She thanked the European Union for the support and contribution to the DINU programme. She also commended OPM PMU for organizing the meeting, explaining that it provided a platform for exchange of information and status reporting on the DINU programme implementation as had been demanded by the OPM Top Management Committee meeting of September 14, 2022. 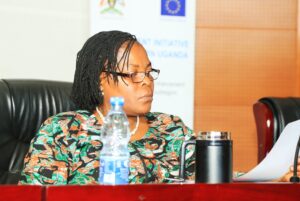 As the DINU programme is heading for its closure in 2023, she said, “more of this kind of interaction as well as OPM-led missions to your projects sites in Northern Uganda is foreseen and in the offing.”

Minister Kwiyucwiny applauded the DINU IPs on the achievements made so far and challenged them to document impact of the programme intervention and ensure the public is regularly updated on the various activities being implemented in Northern Uganda. 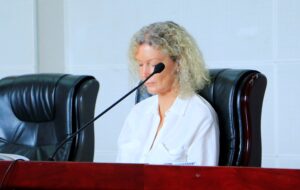 “From your presentations, it is very clear that a lot has been achieved and we need to acknowledge that fact. The next step now is for you to document results. Let our footmarks be visible through well documented results. Physical impact should be emphasized. The people of Northern Uganda now have hope to transit from war to peace,” she explained.

“I think you should increase media coverage of your respective activities so that more people get to know what you are doing,” she advised.

Head of Cooperation of the European Union Delegation in Uganda Caroline Adriaensen urged the DINU IPs to ensure that the investments are implemented in a way that will promote sustainability of gains made even after projects have ended.

“Visibility of the DINU impact remains crucial and lessons by all IPs should be documented,” she advised.

“Operation and maintenance of the infrastructure projects is very important. This meeting will provide us an opportunity to discuss the issue of s 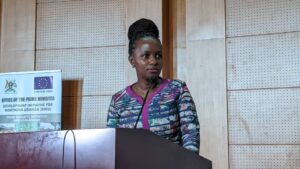 ustainability of interventions established,” he said.

The Development Initiative for Northern Uganda (DINU), a Government of Uganda programme supported by the European Union and supervised by Office of the Prime Minister, was initiated in 2017. The EURO 150.6 million (about Shs597b) multi-sectoral integrated programme covers interventions in three interlinked sector: (1) food security, nutrition and livelihoods, (2) infrastructure (transport, logistics, water, energy) and (3) good governance. DINU is implemented in 41 districts in the five sub-regions of Acholi, Karamoja, Lango, Teso and West Nile for a duration of six years.