The Minister of State for Northern Uganda Rehabilitation, Hon. Grace Freedom Kwiyucwiny, has commissioned a Shs493.7 million agro-investment hub in Gulu, which aims to facilitate inputs and outputs for agro-business and bulking of farmers’ products in Acholi and Lango sub-regions.

The facility that targets more than 1,000 farmers, was established under Chase Hunger and Poverty, a project implemented by National Agricultural Research Organisation (NARO) in eight districts of Nwoya, Gulu, Kitgum, Pader, Lira, Alebtong, Kole and Oyam under the Development Initiative for Northern Uganda (DINU) – a Government of Uganda programme supported by the European Union and supervised by Office of the Prime Minister.

Four other similar facilities have been established under the project in the districts of Alebtong, Pader, Oyam, and Nwoya, totalling to an investment of Shs2.5 billion. 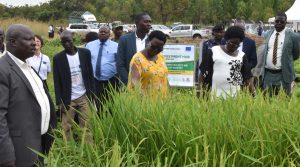 The Minister commended OPM-DINU and NARO for establishing the hardware investment and urged the local leaders to mobilise farmers to embrace the facility for increased farm productivity.

“This is a landmark and I want to congratulate all of us who have been part of this process. Thank you very much. We have to chase hunger and poverty together,” she said.

She challenged the management of the hub to embrace value addition for better incomes explaining, “This should not be a mere store but a processing centre for all commodities produced by all farmers in the area. When we process we add value and can market it very well and earn more.”

Ms. Celine Lhoste, the DINU manager at the European Union Delegation to Uganda, who represented the ambassador, thanked NARO for establishing the hub, which she said will impact many farmers in the area.

“We are delighted to see concrete results delivered by our partners under this unique programme. These kind of facilities in support to farmers will have positive impact on the lives of many households in the Acholi Sub-region and beyond. Many more investments to promote sustainable agriculture and trade have materialized under DINU in Northern Uganda. Communities and local governments have contributed greatly to the success of this programme and have a vital role to play in ensuring that results last and generate greater benefits in the future,” she said.

Ms. Betty Aol Ochan, the Gulu City Woman Member of Parliament, who is a former leader of Opposition in Parliament, described the hub as ‘a blessing to the farmers in the area.’

“As leaders, we must think very fast and lobby for our people. Today, I’m one of the happiest because I was involved in the establishment of this hub from the start. I see this as a blessing for our farmers. I’m a politician but I pledge to you that I will not politicise this project. This facility is a big blessing and everyone must embrace it,” she said.

Mr Gonzaga Mayanja, the Commissioner Monitoring and Evaluation – Local Governments at OPM, who represented the OPM Permanent Secretary, asked the Gulu District leaders to mobilise farmers to utilise the facility.

“The District Commercial Officers and Community Development Officers should play their role well. There should be a clear operation and maintenance plan for sustainability of this facility,” he said.

About the investment hub

It shall also be a one-stop centre for demonstrations of innovations for production and processing of the respective value chain clusters, for input access and output business and acting as a grain aggregation/bulking centre for farmers within the communities hosting the hub.

The Development Initiative for Northern Uganda (DINU), a Government of Uganda programme supported by the European Union and supervised by Office of the Prime Minister, was initiated in 2017.