The Minister asked farmers to engage in commercial farming where they can produce more if the modern storage facility is to be useful.

“This storage facility will be useful when you are able to grow more crops and have enough to store, process and market. That is when you will fight poverty,” she advised on November 25, 2022.

The storage facility valued at Shs134 million was established by the International Institute for Tropical Agriculture -led consortium under the Development Initiative for Northern Uganda (DINU), a government programme supported by the European Union and supervised by Office of the Prime Minister (OPM).

The farmers said the facility with a capacity of 100 metric tonnes, will help them to store and market their produce and earn better incomes.

According to the chairperson, Mr Markdmald Akwar, the group started in 2017 with 30 members and has grown in the last five years to 628 members.

The Minister also visited the Otuke Business and Governance Centre – a Shs1.5 billion complex currently being established by the district under the DINU programme with support from the EU. The centre will house two commercial banks, two pharmacies, shopping arcade and a conference hall.

The project is part of the Local Government Excellence Fund, a model adopted by the EU and the government and being implemented by the United Nations Capital Development Fund (UNCDF) as a driver of local economic development through the establishment of economic infrastructure.

Mr. Francis Abolla, the Otuke District chairman, thanked DINU, a government programme supported by the European Union and supervised by Office of the Prime Minister (OPM), for supporting the district through various interventions.

“I want to thank DINU. It has given us what we can’t describe in our words. DINU has given us a beautiful complex. But I don’t know what next,” said Mr. Francis Abolla, the Otuke District chairman. 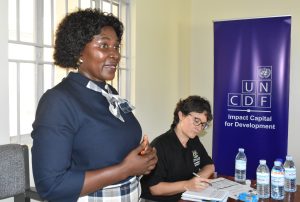 Ms. Jenifer Bukokhe, the Deputy Director Local Transformative Finance at the UNCDF, speaks at the meeting.

Ms. Jenifer Bukokhe, the deputy director local transformative Finance at the UNCDF, asked the minister to lobby for a succor programme after DINU to consolidate the gains that have been made under the programme.

She singled out the integrated revenue administration system (IRAS) saying it has boosted the performance of many hitherto poorly performing districts in the northern Uganda.

“Initially, the plan was to support districts that were performing poorly. Now that their performance has improved, we need to move to impact capital,” she said amid applause from the Otuke District leaders.

Ms. Celine Lhoste, the DINU manager at the European Delegation to Uganda, who represented the ambassador, said UNCDF has done well in working with the District Local Governments across the DINU components.

“I believe that the Otuke Business and Governance Centre showcases sustainability element. It will also generate more revenue for the district,” she said. 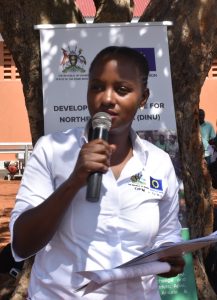 She particularly thanked the implementing partner for their participation in the communication and visibility assessment activity that was organized PMU in July.

“I want to thank UNCDF, every time we call you, you have participated well. UNCDF is one of the partners that have collaborated in the implementation of the DINU programme,” she said.