Kibuku District gears up for the Parish Development Model launch

As the D-Day approaches for the official launch of the Parish Development Model (PDM) by President Yoweri Museveni, line Ministries, Departments and Agencies of government are in last minute preparatory efforts to ensure a successful launch at Kibuku Primary School.

The PDM will be launched on Saturday at Kibuku Primary School in Kibuku District and will be presided over by President Yoweri Museveni.

The Prime Minister Robinah Nabbanja, who has been coordinating the Pre-launch activities in Bukedi Sub-region with a team of ministers were in Kibuku District for a mop up exercise.

The leaders of Kibuku district led by the LC V chairman Hajji Muhammad Nekeba and members of parliament say that they are very ready to host the national event.

“We are extremely delighted to host the launch of PDM and are optimistic that our rural poor will now break the cycle of poverty and enter the money economy,” says Nekeba. 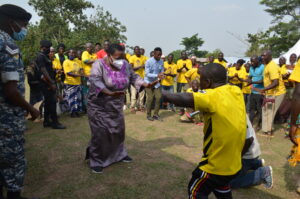 Rt. Hon. Robinah Nabbanja takes to the floor in a traditional dance of the Bagwere in Kibuku District

Stephen Mugole, the Kagweri County legislator says that selecting Kibuku was the right choice and now the people have begun appreciating why they have remained in the poverty cycle.

“Even before the launch of PDM our people have started appreciating that the cause of poverty is within them and indeed they play a great role in wealth creation,” says Mugole.

Several enterprises have been selected to ensure the Parish Development Model helps to increase household incomes and propel 39% into the money economy.

Meanwhile many residents of Kibuku district are optimistic that this intervention shall help them increase on their production and productivity as government plans to send money direct to the parishes.

PM Robinah Nabbanja with Jennifer Namuyangu, the Bunyoro affairs minister being shown the Hass Ovacado in Kibuku as one of the enterprises selected to increase household incomes

The Prime Minister of Uganda Robinah Nabbanja says that they have been in Bukedi sub region to prepare the way for the president to launch the much anticipated Parish Development Model.

“We have come like John the Baptist who made way for Jesus Christ and we are here to prepare you so that the father of the nation comes when you are ready and prepared,” says Nabbanja.

The ground is all set for the much anticipated launch of the Parish Development Model by the President over this weekend in Kibuku District.

The Prime Minister, while on-the-spot assessment of the venue says Kibuku District is the ‘Mecca’ of the Parish Development Model. This is where the President picked the now trending phrase ‘Okukolera ekidda kyonka’, loosely translated to mean working for the stomach only.