Leaders in Ibanda District have appealed to the Office of the Prime Minister (OPM) to increase its support to the Parish Community Associations to cover the entire district.

Happy Herbert Mayanja the LC V chairman Ibanda District said that OPM has delivered funds to only 15 villages in the District yet all the over 600 villages are in need.

“We have received support from OPM meant for the Parish Community Associations and only one village was selected from each parish, we request that the support is rolled out the remaining villages because the impact is visible,” said Mayanja.

Mayanja was addressing hundreds of people who turned up to celebrate the belated Ibanda District International Women’s Day at Ishongororo Sub County headquarters on Saturday.

OPM under the Luwero-Rwenzori programme is supporting communities with to improve Government coordination efforts of its activities through:

Provision of an effective delivery mechanism of affordable financial services to farmers and other small-scale enterprises among participating parishes.

The initiative aims at providing a platform for collating government funding, initiatives and resources to community groups within a parish.

By bringing together various MDAs in a parish; the PCA thus is able to coordinate and understand which agency or entity is doing what in a particular area.

The Prime Minister Robinah Nabbanja joined the people in Ibanda District, to celebrate a belated Women’s Day. This is an international day celebrated annually on March 8th, to take stock of achievements made in women’s emancipation.

A number of districts in the country have belatedly celebrated this day in the recent past. In Ibanda, the celebrations were held at Ishongororo sub county headquarters, and attended by a cross section of Guest Members of Parliament. 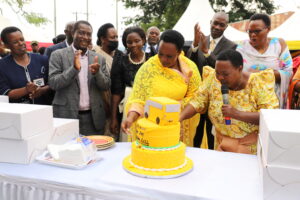 The Rt. Hon. Prime Minister Nabbanja Robinah joined by other Members of Parliament to cut the cake during the belated Ibanda District Women’s Day celebrations on Saturday

Jane Bainomugisha, the Ibanda District Woman Representative said that to celebrate this day with a purpose, a mini-fundraising drive was conducted to raise money to facilitate ongoing women’s projects in the District.

“On my first women’s day celebration as the Ibanda District woman Member of Parliament I decided to invite colleagues to contribute towards the empowerment of women groups financially,” said Bainomugisha.

Nabbanja lauded area Members of Parliament and the District leadership for creating a conducive environment that has enabled Ibanda to be one of the best performing districts.

“I want to appreciate the good leadership exhibited in Ibanda District that has led to back to back excellence in service delivery unlike in other districts where we are involved in fights over corruption,” said Nabbanja.

She pledged total government commitment to ensure that local governments effectively deliver public services especially those that are using the funds well.

Earlier, a number of speakers raised salient issues that needed urgent government intervention.  These included lack of a district hospital, a technical school and the need for more funding to support development projects running in under the Luwero-Rwenzori government programmes.

The Prime Minister highlighted benefits that women are set to get from the Parish Development Model. She encouraged women to fully embrace this program in order to consolidate their emancipation.

Claudia Tukamushaba was the proud recipient of three million shillings given to her by the Prime Minister. This money was meant to facilitate her in reconstructing her house which had collapsed.

The Prime Minister later awarded certificates to people who have been exemplary and participated in empowering women in the district.

Ibanda District was created on 1st July 2005 curved out of the greater Mbarara District.