Hon. Anyakun has directed all the refugees staying in the Bunagana border community to declare themselves to the authorities at Nyakabande Transit Centre in Kisoro District for registration.  She said that the longer they stay in the community, they pose a security threat to the region and there is a risk of them spreading diseases. They also affect planning and response interventions.

“You should all register within seven days or go back to your country. Otherwise you will be arrested,” she said. She gave them 13th May, 2022 as the dead line for registration. 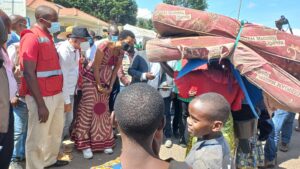 Hon. Anyakun Esther engages with one of the refugees who was crossing over from Uganda to DRC at the Bunagana border as the UNHCR Representative to Uganda, Joel Boutroue looks on

The State Minister for Disaster Preparedness Management and Refugees Hon.  Esther Anyakun was in Western Uganda with Joel Boutroue, the Country Representative for UNHCR, officials from government Ministries and NGOs working with the refugees. They were on a fact finding mission to address the challenges the country is facing in hosting the increased numbers of refugees from Congo. The mission was intended to find solutions to the challenges in order to improve the welfare of the refugees and the host communities.

Refugees from D.R Congo started flocking to Uganda on 28th March, 2022. So far 17,000 Congolese refugees have been settled in Rubondo mini base camp in Nakivale refugee settlement in Isingiro district. Those that were still in the community were about 4000. 60% of the refugees in Nyakabande transit centre are children and most of them are unaccompanied.

Among the challenges identified is the high number of patients at the health centres, lack of medical supplies and few medical personnel compared to the population they serve. There are increased cases of malaria, infections, anaemia and malnutrition due to inadequate food supplies and insufficient clean water supply. Hon. Anyakun appealed to donors and other partners to increase financial support to government to enable us to increase the food portions and also provide food supplements to children, pregnant women and lactating mothers.

Minister Anyakun, UNHRC Representative to Uganda, Boutroue and other stakeholders listen to a healthworker at Rubondo Health Center II in Nakivale Refugee Settlement.

Hon. Anyakun and the UNHCR country representative were joined by the State Minister for Youth and Children Hon. Sarah Nyirabashitsi in meetings with stakeholders in Nakivale settlement and also visited Rubondo Health Centre II and Gisula tank hill. Due to the big population, the ministers where informed that each community can only get clean piped water from the reserve tank twice a week. The rest of the days they fetch water from other sources.

The team also visited Nyakabande transit centre and Bunagana reception centre in Kisoro district to assess the situation on the ground.

“As the Office of the Prime Minister we are going to renovate the school, the roads and the health centres and all the structures that have been used by the refugees,” Hon. Anyakun promised, “We are going to find a solution to the hygiene situation by probably building more pit latrines.” 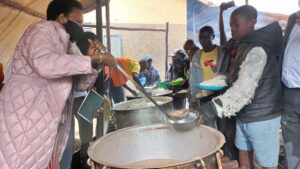 The State Minister for Youth and Children affairs thanked government for the open door policy that allows refugees to come to Uganda for safety.

“If they had not come may be they would have died on the other side” she said. Hon. Sarah also encouraged the refugees to move to Nakivale settlement where they can get better services, since Nyakabande is just a reception centre. 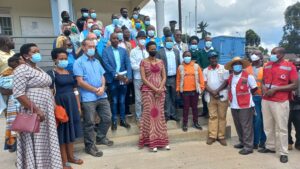 The Minister of State for Relief, Disaster Preparedness and Refugees, Hon. Anyakun poses for a group photo with the stakeholders who attended the meeting at the Bunagana border in Kisoro District.