Government is in the final stages of reviewing the Public Service Standing Orders to streamline service delivery and deal with corruption among civil servants in the country.

This was revealed during a feedback and planning meeting organized by the Office of the Prime Minister held at the President’s Conference Hall in Kampala.

This followed the discovery of glaring gaps  during the accountability meetings conducted in central region so far.

This was meant to establish how funds sent from government were being spent on the ground and the benefits.

The Attorney General Kiryowa Kiwanuka said that these Public Service Standing Orders are like an operational manual and are not reflected in the laws of Uganda at all. 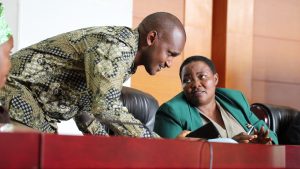 Hon. Frank Tumwebaze (left), the Minister for Agriculture Animal Industry and Fisheries talking to the Premier during the feedback and planning meeting

It was observed that some civil servants are hiding in the Public Service Standing Orders to under perform knowing that they are protected by the law and are permanent and pensionable.

Kiryowa said that he had already written to the Public service  on issues of interdiction whenever found in error in the course of service delivery.

The Attorney General guided that during the accountability meetings, the teams would move with police detectives to record statements on site so that there is no alteration of the evidence.

Nabbanja called for teamwork between political leaders and Permanent Secretaries to ensure smooth delivery of services to the people.

During the service delivery accountability field trips, it was observed that there was lack of transparency about available resources sent by government to the districts.

The technical officers were faulted for hiding such vital information.

“Lack of transparency means that spending of government resources is done in the dark. This has promoted corruption, bribery and shoddy work,” noted Nabbanja.

To ensure transparency and accountability, it was recommended that there was need to deal firmly with cases of corruption by punishing culprits.

“We need to bite because some people think they can share out government funds without minding about the people in this country,” said Muruli Mukasa, the Minister for Public Service.

“We need to review our role as Ministries to be more visible in the Local Governments and therefore we should be providing reports to the Prime Minister on the extent to which we have performed,” said Magyezi.

He expressed concern that every year more than 30Bn shillings was being returned to the treasury because of lack of proper guidelines.

“In the last 2-3 years I see a return of more than sh30Bn to the treasury each financial year. Districts are complaining of lack of inadequate guidelines especially on procurement especially in programmes like The Uganda Intergovernmental Fiscal Transfers Program (UgIFT) and Uganda Support to Municipal Infrastructure Development (USMID) programme. We need to review our guidelines,” said Magyezi. 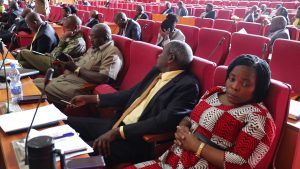 He said most District Roads Committees were ineffective because the Members of Parliament had abandoned their roles and left everything to the District Chairmen to handle.

This service delivery accountability programme is scheduled to be rolled out throughout the country.

Ministers and Members of Parliament will be mobilized in regions, to participate in this exercise, like it was the case with the Parish Development Model sensitization.

Among those who attended included the 3rd Deputy Prime Minister Rukia Nakandama, a cross section of Ministers and Permanent Secretaries.