The problem of Mt. Elgon encroachment has been in existence for some time now. 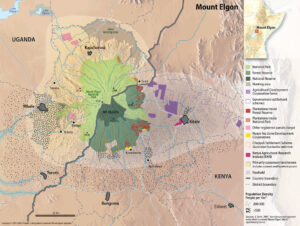 Map of the Elgon National Park

It started as far back as the 1930’s. In some instances, government has found solutions while other cases have ended up in court.

Following a directive from the President to have this issue resolved, Prime Minister Robinah Nabbanja had an aerial tour of the affected areas, and later held a meeting at Mbale Resort Hotel in Mbale City.

The line Ministers and the technical officers who had the aerial tour, gave divergent observations. One group supported the status quo to remain, while others observed serious encroachment and called for immediate action.

Tom Butime, the minister for Tourism and Antiquities said that the entire region of Elgon is sitting on a time bomb if the encroachment is not checked as early as possible.

“We need to protect this resource because its gold for us and the people beyond us,” said Butime.

He expressed concern that people are settling on top of cliffs which is endangering their lives.

Raphael Magyezi, the local government minister said that the people are settled peacefully and therefore resettling them would affect their livelihoods and proposed that government degazates  the encroached area for the people.

“I saw the encroachment but it’s minimal and to me I hope the government should allow these people to stay where they are but demarcate the forest to save it,” said Magyezi.

“Mt. Elgon and its Biodiversity is a critical national resource, benefitting two countries-Uganda and Kenya. It is a source of water, food and medicinal plants. Therefore, it must be protected at all costs,” said Nabbanja Robinah, the prime minister.

She said that leaders should tell the truth in regard to the need to protect the environment and should never politicize such important issues.

“The country is facing challenges of encroachment in other areas such as swamps and river banks but we have some politicians who want us to allow people to settle in the National park and this we shall not allow,” said Nabbanja.

The findings from this field visit will be presented to the Cabinet to guide in taking a final informed decision and to settle this perennial problem once and for all.

However, Members of Parliament are asking the government to first conduct thorough consultations before coming up with a final decision.

The Prime Minister after an engaging discussion, issued some directives and resolutions, to be effected by the Ministries of Tourism and that of Environment.

The Mt. Elgon Forest encroachment catchment areas are located in the districts of Namisindwa, Bududa, Kween,   Kapchorwa, Mbale and Sironko.