Government rallies development partners for support in the Elgon region

Prime Minister Robinah Nabbanja, on Tuesday chaired a multi-sectoral meeting to receive an update on the flood disaster situation which occurred in Mbale City.

Development partners who attended the meeting, pledged a wide range of intervention measures to contain the situation. 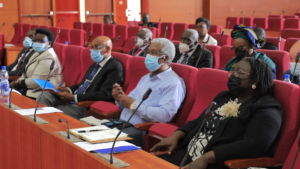 Following a directive from the President, Rt. Hon. Robinah Nabbanja visited the affected areas on Sunday, to assess and provide overall coordination of the support and rescue effort.

“Our target is to save the lives of those people at high risk and mitigate the impacts of the disaster,” said Nabbanja.

The search and rescue continue by the Uganda Police, UPDF, Ministry of Health, Red Cross and the local community.

The report presented to the Prime Minister and the Development partners, indicated that the floods displaced over 150 households.

The Prime Minister was informed that there was need to organize more emergency food and non-food items, water treatment, shelter and medical services for the displaced people.

The development partners pledged a wide range of interventions that included resource mobilization.

The United Nations (UN) agencies pledged to mobilise resources to aid the flood victims following the death of 26 people and 900 displaced.

The announcement was made by the United Nations Development Programme (UNDP) Resident Representative, Elsie Attafua, who represented the UN Resident Coordinator Susan Namondo during the meeting.

“As UN family, we are going to mobilise resources with other partners to support the victims of floods and we thank the government for response so far.” The UN agencies that attended the meeting included United Nations Children’s Fund (UNICEF), World Food Programme (WFP), UNDP, Food and Agricultural Organisation (FAO), World Health Organisation (WHO) among others.

She outlined the interventions the UN agencies are involved in during the emergency response among them providing psychosocial support, providing Personal Protective Equipment (PPEs), health equipment to address cholera, rapid assessment in order to generate data for rapid assistance, deployed the technical expertise.

“We are involved in contingency planning. Today it’s Mbale but tomorrow it will be somewhere else and beyond and, therefore, priority is investing in early warning systems is critical,” said Attafua.

The UN agencies also stressed the need of creating awareness among the communities of environment protection and wetland conservation, saying restoration of wetlands is critical and planting of trees.

The floods that have ravaged Mbale city claimed killed 26 lives and  displaced 900.

Later, the Prime Minister flagged off 12 tonnes of relief food to Kotido District, for distribution to the famine stricken families that was donated by a Ugandan in the United States of America, Dr. Victoria Nalule on behalf of Nalule minerals. 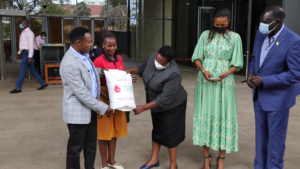