President Yoweri Museveni has asked countries in the East African Community and Africa in general to integrate to create bigger markets to tap into the world market for the development of the continent.

The president’s message was delivered by Prime Minister Robinah Nabbanja at the opening of the Jua Kali Exhibition, which is organized by the East African Community (EAC) to promote intra-trade in the region.

“Africa, with all its natural resources contributes only 3% to global trade. The reason for this paradoxical situation is quite obvious. It is simply because colonialists split us into small pockets of economies called ‘sovereign countries’ by creating artificial borders. Through these borders, we have continued to compete with each other over markets, creating tariffs and non-tariff barriers and all sorts of other obstacles between ourselves. We have not fully exploited and harnessed our competitive advantages by working together in collaboration,” noted Museveni. 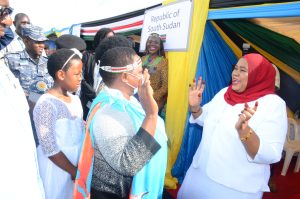 Riziki Pembe Juma, the Minister of Community, Gender, Elder and Children from the United Republic of Tanzania welcoming Prime Minister Robinah Nabbanja at the Tanzanian Stall in Kampala

The President said that the EAC is now a seven Partner States strong regional bloc with a population of over 280million, GDP of US$ 305bn and land mass of 4.8million square km.

He said that the micro, small and medium enterprises contribute 60% of this GDP within the region.  He added that at the 4th Summit of the EAC when the Treaty establishing the East African Community was signed, they took a decision to consistently hold these annual Trade Fairs on rotational basis in Partner States of the East Africa.

The EAC is the most robust regional bloc in Africa, with a rapid growing membership. In 1999, the EAC comprised of only three (3) Countries i.e. Uganda, Kenya and Tanzania with a population of about 90 million.

“Today, we are seven (7) Partner States with the addition of Burundi and Rwanda in 2007 and most recently South Sudan and Democratic Republic of Congo bringing our total population to over 300 million. We have been in the Customs Union since 2005 and achieved the Common Market in 2010 and are now poised for a Monetary Union in 2024 and ultimately a Political Confederation,” the message read in part.

He said that the event was another manifestation of the out looking stance we have always taken in the East African Community. 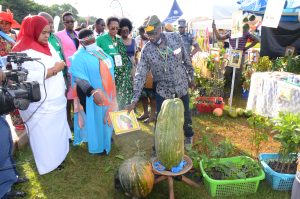 Agriculture innovation at the 2022 EAC Trade Fair at Kololo

“As I have always guided, our small disintegrated countries can do so little in terms of trade and investment. We must, therefore, as a matter of survival integrate to create bigger markets,” said Museveni.

Riziki Pembe Juma, the Minister of Community, Gender, Elder and Children from the United Republic of Tanzania says that the joint trade fair is crucial in promoting innovation in the region.

The Minister for Science, Technology and Innovations Dr. Monica Musenero said that Jua kali Innovators were key in the Mobility Ecosystem to help them appreciate the journey from idea to a profitable enterprise.

The establishment of the African Continental Free Trade Area is also a huge opportunity to boost Pan-African trade, as well as strengthen regional value chains.

The AfCFTA will increase the market size to 1.42bn representing 16.72 per cent of the world population. 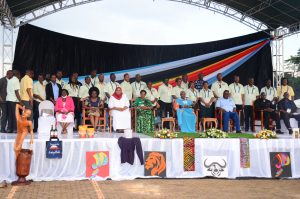 The Theme of the Trade Fair: “Buy East African, Build East Africa for Resilience and Economic Development” is very appropriate to cause progress.

The trade Fair will run until the 18th of December 2022 at Kololo Independence grounds.

Prime Minister Nabbanja appealed to Ugandans to go to the trade Fair and support innovation by buying the products.

The business communities of micro, small and medium-sized enterprises (MSMEs) from the seven EAC partner states have all descended at the Kololo Ceremonial Grounds with various goods and services made from the region.

By Robert Lwasa|2022-12-12T14:46:50+03:00December 12th, 2022|Categories: Featured|Comments Off on East Africa’s biggest trade fair opens in Kampala as President M7 calls for integration to tap into the World market