This was contained in a congratulatory message read for him by the Prime Minister Robinah Nabbanja at a wedding ceremony for the Woman Member of Parliament Agago District, Akello Beatrice Akori.

The Prime Minister, who represented President Museveni, was met on arrival by the Minister for Health Dr. Jane Ruth Achieng and area Members of Parliament.

The president congratulated Mr. and Mrs. Madaraka Kenneth Orik upon this spectacular milestone. 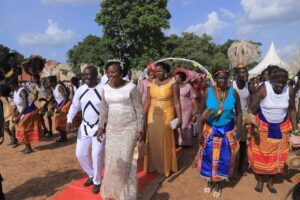 “I always advise young people that when you complete your first crucial stages of education – it is important to get married. First of all, when you get married, you get organized and set pace for development. Marriage also helps to shield young people against irresponsible and reckless lifestyles,” the speech read in part.

The president thanked the parents of Hon. Okwera Peter and the family of Rt. Rev. Ocibo Denis Akori for the invitation they accorded him to witness the joy of seeing their children united in holy matrimony.

“ I congratulate you upon this wonderful occasion. I have not been able to physically be with you to share in your joy. I have, however, delegated the Rt. Hon. Prime Minister, Robinah Nabanja to represent me,” said the president.

He said that this marks a new chapter in the lives of the distinguished bride and groom and also cements the relationship between the two families.

“I congratulate the parents for nurturing and giving their children good upbringing that has enabled them to come to this glorious moment,” read the speech. 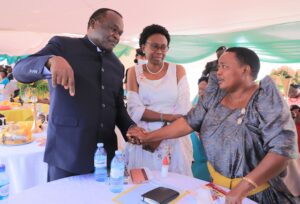 The president said that the couple has entered a lifelong relationship born out of their own choice.

“My appeal to you is to anchor your relationship on love, commitment, understanding and respect for one another,” the president said.

He acknowledged Hon. Akello Beatrice Akori for her ardent contribution and commitment to national service and for the unwavering support she has always given to the National Resistance Movement Party.

“I want to thank all the people of Agago District for the support you have continuously given to the National Resistance Movement. Government is committed to continuing with developmental efforts, with particular emphasis on increasing household incomes,” said the president.

The wedding ceremony conducted at Lira Palwo Senior Secondary School playground in Agago District, was attended by the Chief Justice Owiny Dollo, Deputy Speaker of Parliament Thomas Tayebwa, a host of MP’s, religious leaders, among others.