A total of 160 young people from the five districts of Arua, Madi-Okollo, Nebbi, Pakwach and Zombo have been empowered with crucial vocational skills to create new sources of livelihoods following three months of intense training in agriculture and agribusiness related areas.

The training in courses that included bee keeping, vegetable farming, poultry and piggery, was fully sponsored by Office of the Prime Minister (OPM) under the Development Initiative for Northern Uganda (DINU) Youth Skilling Programme supported by the European Union. The programme targets to train 1,300 youths selected from 41 districts in Northern Uganda. 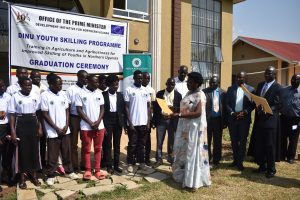 The Minister of State for Northern Uganda Rehabilitation, Hon. Grace Freedom Kwiyucwiny, hands over certificates of completion to the learners at ADRAA on January 20, 2023

At an award ceremony where certificates of completion were issued by the Franciscan Brothers ADRAA Agriculture College on January 20, 2023, the Minister of State for Northern Uganda Rehabilitation, Hon. Grace Freedom Kwiyucwiny, said: “Substantial progress and gains are being made to prioritize skilling of the youth across the country. I encourage you to apply the knowledge and skills acquired to start your own business. Indeed, with today’s graduation, we all consider you as an “agent of transformation”.

The Head of the European Union Delegation to Uganda, Ambassador Jan Sadek, stated: “The European Union is delighted to work with OPM to implement such an important programme. Offering opportunities to young Ugandans to gain crucial skills in the agriculture sector will have direct impact on their employability, income and livelihoods. I trust that they will become role models for other young people who will benefit from their acquired knowledge.”

According to the DINU National Programme Coordinator, Ms. Pamela Kabahesi, the DINU Youth Skilling Programme (YSP) targets to train a total of 1,300 youths selected from 41 districts in Northern Uganda in agriculture and agribusiness areas for improved employability and income-generating opportunities in the agricultural sector. “With an intake of 160 youths to be trained from November 2022 to May 2023, each TVET was awarded a grant contract of approximately 50,000 EUR or Shs220 million to conduct the skills development and training programmes in key areas such as: horticulture, crop & animal husbandry, beekeeping, agro-input supply management, tree nursery operation and carpentry,” she said.

She explained that the short-term vocational training programmes also include an apprenticeship and delivery of a set of start-up kits for the trained youth, enabling them to practice the acquired skills and to set-up and create small businesses.