Moroto District in Karamoja Sub-region is a semi-arid area and residents’ livelihoods predominantly depend on livestock. However, the quality of the meat consumed on the market has been a big question since the district has had only one slaughterhouse.

According to Dr. Denis Baraza Wabwire, the Moroto District Veterinary Officer, slaughters have always been carried out in the bushes thereby exposing consumers to health risks and also causing loss of local revenue to the district.

However, this is set to change following the construction of two slaughterhouses in Rupa and Katikekile Sub-counties that were handed over to Moroto District leaders last week.

The two facilities estimated at Shs52 million were constructed by CARE Denmark and Catholic Relief Services (CRS) under the Development Initiative for Northern Uganda (DINU), a government of Uganda programme supported by the European Union and supervised by Office of the Prime Minister (OPM).

“We have a challenge in Karamoja. Slaughters are done from anywhere in our community. We had only one slaughterhouse in the municipality. Now we have three facilities in the district with the addition of these two by CARE and CRS and for this we are grateful. We thank all partners who contributed towards this facility. Under the animals or public health act, all animals or any meat to be consumed by the public must be inspected,” Dr. Wabwire explained adding: “Imagine the meat being consumed here is largely slaughtered in a kraal which gives us a hard time to inspect and imposes a risk to the consumers. Our partners have done their work, now the ball is in our hands”.

Mr. George William Wopuwa, the Moroto RDC, who presided over the event, applauded the DINU programme for the support and urged the community to embrace the development. 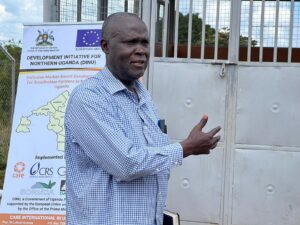 Mr George William Wopuwa speaks at the handover of a slaughterhouse at Katikekile Sub-county in Moroto District on September 8, 2022

“Let us support this programme, one way of supporting is to bring the cows and goats to be slaughtered at the facilities and this will reduce theft because the cows that come here have ownership. When you go to steal, you will be exposing your cows too. Therefore, let’s keep and multiply what we so that this place is useful. We thank partners for this work because the district cannot do this alone,” Mr Wopuwa said.

The Chief Administrative Officer, Mr Komakech Oluba Charles said, the illegal slaughters were happening since farmers wanted to evade tax but hopes this will now end.

“The illegal slaughters were being done to avoid small taxes. Apart from the revenue, we hope people consume good meat and not sick animals to avoid diseases. We want to thank DINU. You have done a lot for us. We are also aware that the DINU project is coming to closure, but we have learnt a lot. We had a lot of software on this project, and this has caused impact. However, in Karamoja you need to be a little patient to see a big change,” he said.

Moroto District chairperson David Koryang said DINU intervention has made a big impact on the communities so far.

“The interventions were good, and the participants were able to withstand the hunger crisis. I interacted with some of them, and they said they are continuing with what they learnt even after the project closes. The mind-set of our people has changed,” he said.

It is estimated that more than 300 cows will be slaughtered monthly at the two facilities with a projection of Shs3 million in local revenue for the district.

The slaughterhouses were among the several interventions Implemented by CRS and CARE under the DINU program to support small holder farmers in value addition chain through sustainable market infrastructure chain.

“We did not have suct structures before but the district leaders requested for this structure and we know they will be responsible for it. Some of the framers have been able to adapt. I hope this structure will help the market to become operational,” said Mr Edward Eko, the DINU focal person in Moroto District.

According to CRS Nutritional technical team leader Joanita Nagaddya, the slaughterhouses are beneficial to the health of the people, food safety and meat quality.

“We are celebrating this milestone as a district, as a project and as a community,” she said.

“As a lead agency, we value this partnership. We would not have managed if the district was not very cooperative. For any income generating activity, sustainability becomes a key issue and I believe this should not be hard to sustain because it generates income. We also note that the DINU participants were not affected by the hunger crisis and this is testimony that if the mandate is extended we can do more,” he said.

Under the Development Initiative for Northern Uganda (DINU), a Government of Uganda programme supported by the EU and supervised by OPM, Care Denmark received a grant in 2020 to implement a project, “Inclusive Market-based Development for Smallholder Farmers in Northern Uganda.” 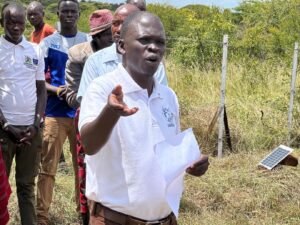 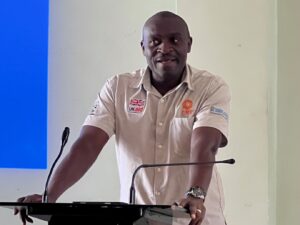