President Museveni has commended the church for collaborating with the government to provide health services and improve the social welfare of the citizens.

He said the church has not only committed to the spiritual growth of Ugandans but also their social-economic transformation.

The President made the remarks in his speech delivered by the Prime Minister, Rt. Hon. Robinah Nabbanja at the Golden Jubilee celebrations of St. Kizito Hospital Matany in Napak District on Saturday.

St. Kizito Hospital Matany is a non-profit private hospital located in Napak District and it belongs to the Catholic Diocese of Moroto. The 250 – bed capacity hospital provides social and spiritual services to the community.

President Museveni said St. Kizito Hospital Matany has played a huge role in the development of the nation since the foundation for building a productive workforce is based on a healthy and educated population.

“The increased cases of cancer, diabetes and heart-related problems especially in urban areas is because people eat too much and do not exercise. I call upon all the leaders to carry the message of sensitizing about lifestyle change to curb these new killer diseases among the people. The good news is that these non-communicable diseases are easy to prevent. One simply has to change lifestyles by exercising more and watching their diet,” Museveni said.

The President also called for concerted efforts among the leaders towards the drive to increase household incomes by rallying the population to venture into the four major sectors of creating wealth and jobs. He pledged the government’s commitment to fund organised groups that will venture into the four major sectors namely; Commercial Agriculture, Industrialization, Services and ICT.

The President asked the public to adhere to the guidelines of the Ministry of Health on COVID-19 and to continue observing the Standard Operating Procedures.  He pledged to contribute UGX 50 million towards St. Kizito Hospital’s fundraising drive to purchase special equipment.

On her part, the Prime Minister pledged the government’s commitment to supporting the hospital in solving some of the challenges it is facing. The Premier donated UGX 10 million towards the fundraising drive.

The Minister of State for Health in charge of General Duties, Hon. Anifa Kawooya thanked the church for contributing to Uganda’s health sector. She said the government will address some of the challenges the hospital is grappling with through the supplementary programs at the Ministry of Health. She also noted that the ministry will continue to support the hospital with medical supplies and staff recruitment. She said the First Lady’s pledge to purchase an ambulance for St. Kizito Hospital Matany will be fulfilled.

The Minister of Karamoja Affairs, Dr. Mary Goretti Kitutu said the government is undertaking disarmament exercises in Karamoja to address the existing insecurity in the area. She donated UGX 5 million towards the fundraising drive. 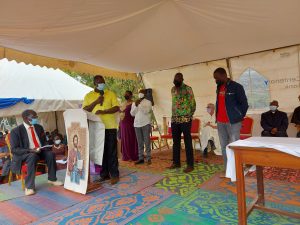 The Minister of State for Teso Affairs, Dr Ongola-Obote hailed the leaders of Napak District for enhancing development in the area. He pledged UGX 3 million toward the fundraising drive.

The Chief Executive Officer of St. Kizito Hospital Matany, Br. Gunther Nahrich noted that the hospital offers highly subsidized services to the community and thus asked the government to support it with funds. He also called upon the public to conserve the environment by planting trees.